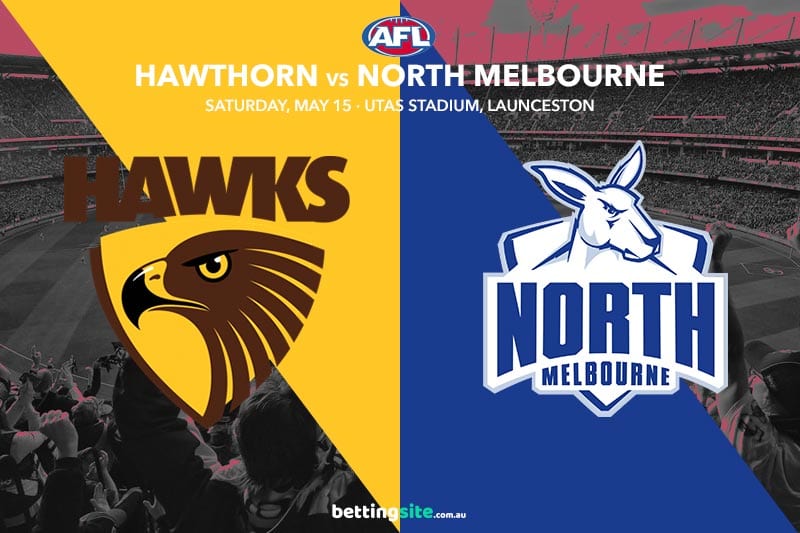 Can the North Melbourne Kangaroos get their first win of the 2021 AFL Premiership season when they face the Hawthorn Hawks this Saturday in Launceston?

The Roos and Hawks sit 17th and 18th respectively on the AFL ladder and have been hard to watch this season. North Melbourne is the runaway favourite for the wooden spoon, but that might change if Hawthorn can’t get the job done this weekend.

The North Melbourne medical staff will be working overtime this week as Jaidyn Stephenson (wrist) and Aiden Bonar (thigh) extend their injury list to 15 players, giving the Roos the longest injury list in the AFL.

Alastair Clarkson will be watching Jaeger O’Meara, Shaun Burgoyne and Jack Gunston eagerly at training this week, as all three senior Hawks need to prove their fitness if they want to make the trip to Tasmania.

The Hawks have notched up just one win from their past seven matches, yet online bookmakers are starting them at $1.40 against the winless Kangaroos this weekend. Hawthorn’s two wins this season were both decided by less than a goal, but that may change this Saturday against the Roos.

Both the Hawks and Roos are struggling to consistently hit the scoreboard this season, as the clubs also rank 17th and 18th respectively for points scored in 2021. Chad Wingard has kicked 11 goals in his last five matches against North Melbourne and could be the answer for Hawthorn up forward.

Someone in the Kangaroos midfield needs to stand up against Tom Mitchell, who is averaging the almost 35 disposals per game this season. Kayne Turner has been an effective tagger this season, but we think Luke Davies-Uniacke will spend some time on the 2018 Brownlow Medal winner.

LDU is a bright prospect, but he is yet to break out at senior level. This could be a perfect opportunity for the former no.4 draft pick to learn from the best ball-magnet in the business.

Hawthorn to win by 25+ points

If Jaeger O’Meara does return for the Hawks this week, he will join Mitchell, Liam Shiels, James Worpel, Ben McEvoy and Tom Phillips in a strong midfield mix. The Roos simply do not have enough talent to keep up with Hawthorn on this occasion, especially without their leading goalscorer, Jaidyn Stephenson.

Luke Davies-Uniacke to get 20+ disposals

Ben Cunnington has carried the Kangaroos in the midfield this season, but we think this will be Luke Davies-Uniacke’s time to step up. LDU averages just under 20 disposals per game this season, and he is paying a generous $2.10 to hit that mark this week. We like those odds.

Chad Wingard should move forward and kick a couple of majors to the help the Hawks win by more than 25 points. LDU should utilise his big frame in the midfield for North Melbourne, but this is Hawthorn’s game to lose.