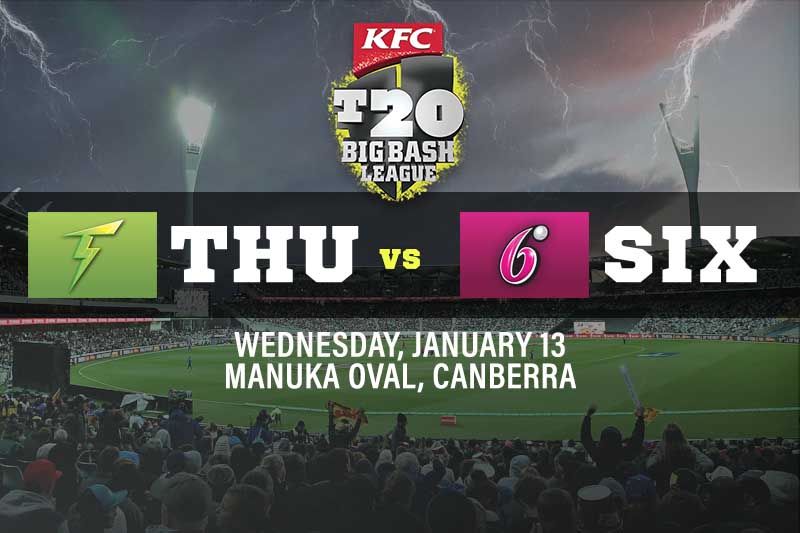 It’s the Sydney Big Bash League derby with a twist! The top of the table Sydney Sixers take on the second place Sydney Thunder on Wednesday night at Manuka Oval.

In an ever changing world the game was meant to be held at the Sydney Showgrounds, but last week the decision was made to play the Sydney Derby at Manuka Oval, Canberra, following the Northern Beaches outbreak.

The Thunder are coming off a last start defeat to the Perth Scorchers on Saturday night. It was the Thunder’s second loss in their last three games and the Green side of Sydney will be looking to turn around this mid-season form slump with a win against the Sixers.

The Thunder will be needing more out of Hales and Ferguson who have not hit the scoreboard recently, and they need them to be in-form leading into the finals. Sam Billings was the lone shining light with the bat on Saturday night when he smashed 83 off 48 balls to give the Thunder a chance when all hope seemed lost.

The Sixers on the other hand have Dan Christian to thank for their last ball win against the in-form Brisbane Heat on Sunday night. The veteran came in when the score was 4-54 in the ninth over, but managed to whack 61* from 38 balls to get the Sixers over the line on the last ball of the match. Having combined with skipper Daniel Hughes for a 72 run partnership, the Sixers would have been pleased to see two of their most valuable players combine to lift them off the canvas.

Despite a poor showing with the bat on Saturday night against the Hurricanes, we’re tipping the Thunder to get the job done over their cross town rivals. With top spot on the line on Wednesday night, we’re backing the explosive batting line-up the Thunder possess to be too strong for this Sixers bowling attack. The Thunder also have a bowling attack not to take lightly, with Milne’s pace up front and the spin duo of Green and Sangha after the powerplay, means the Thunder can be confident of defending/restricting the Sixers.

The keeper-batsman from England was able to show his worth for the Thunder against the Hurricanes where he looked near unstoppable. With scores of 22 and 83 in his last three innings, Billings looks to have found his groove in the Big Bash. If the Thunder are required to set a target for the Sixers to chase, Billings has a gear that not many batsmen can go to in the BBL, and we’re backing him to make a more than handy contribution for the second game in a row.

Prior to BBL10 it was Tanveer who? Now it’s a name to remember for the future! The leg spinner is arguably one of the best stories to come out of BBL10 with 15 wickets to his name from nine games. His went wicketless against the Hurricanes on Saturday, but getting back to Manuka, a pitch that is conducive to spin, can only be a benefit for the up and coming spinner. He is paying $2.160 with top Australian bookmakers to take 2+ wickets.