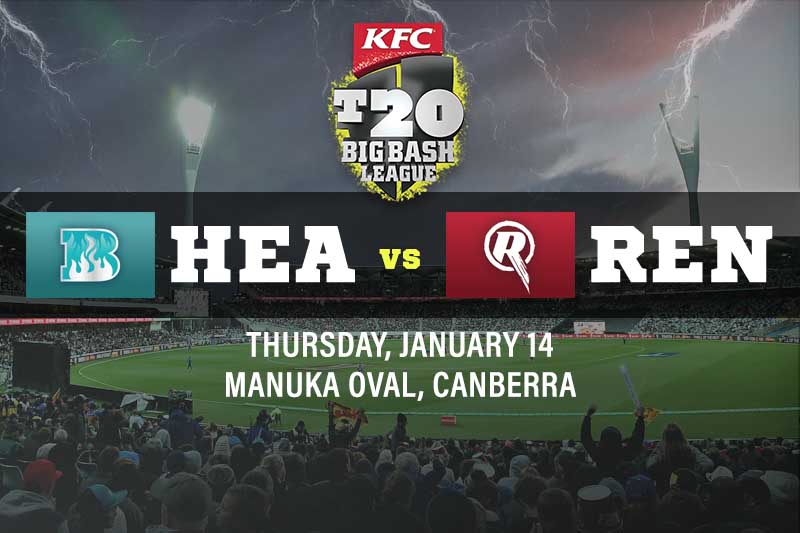 A spot in the Big Bash League finals is still up for grabs if the Brisbane Heat defeat the Melbourne Renegades at Manuka Oval on Thursday night.

The Heat have won three of their last four matches, putting them up to sixth position in the BBL standings, one spot outside the finals cut-off.

This year’s Melbourne Renegades squad may be the weakest Big Bash League team we have seen, but that didn’t stop them from beating the Adelaide Strikers in their last outing.

A wonderful innings from Mohammad Nabi saw the Renegades upset the Strikers at Adelaide Oval, breaking their streak of seven straight losses.

This match has been moved from Marvel Stadium to Manuka Oval due to border closures, with many other BBL games set for a change venue to allow players to move without needing to quarantine.

Although he wasn’t the best batsman in the Australian Test side, Joe Burns fits in well at BBL level and has been a huge catalyst for the Heat. The powerful batsman has much more freedom in the shorter format and can use his strengths optimally, allowing him to see the ball and hit it. Burns has hit plenty of boundaries for the Heat since returning and should enjoy the big field at Manuka Oval.

Kane Richardson to take 2+ wickets @ $2.50 with Ladbrokes
One of the saving graces for the Renegades this season has been the consistency of their gun fast bowler, Kane Richardson. With 12 wickets from his nine matches, Richardson is a huge threat for any opposition, but his pace will worry the Heat. Richardson took two wickets in his last match at Manuka Oval against the Sydney Thunder, where he was clearly the go-to man in attack for the Renegades.

The change in venue will make a difference to this outcome, as the Renegades would have expected to play at home, but will now travel interstate instead. Given the Heat still have an attainable finals position to play for, they should not let a match like this slip through their grasp.