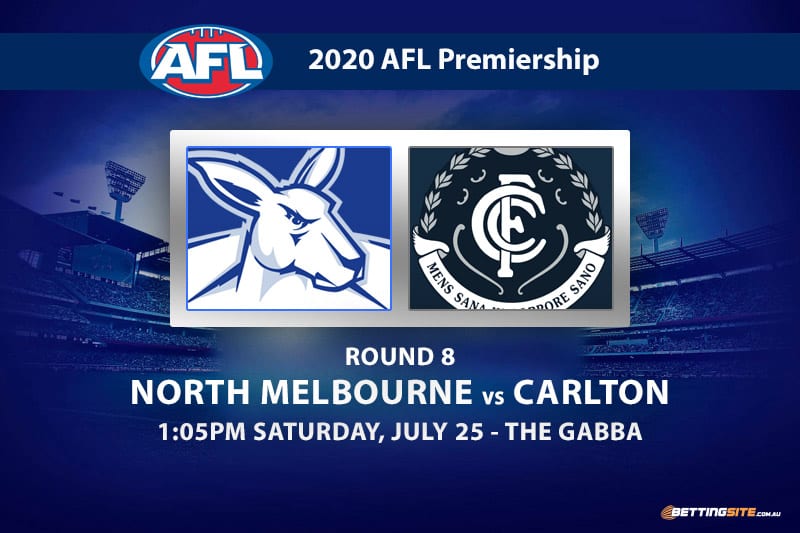 Saturday’s AFL action starts off in Queensland with the North Melbourne Kangaroos and Carlton Blues clashing at the Gabba.

David Teague and Rhyce Shaw both became head coaches in the AFL midway through 2019, but only one of those rookie gaffers will be happy his team coming into round eight.

The Roos have lost five straight matches and fallen down to 17th on the ladder, putting them above only the winless Crows, while the Blues are competitive every week and sit one win out of the top eight.

Robbie Gray broke Carlton hearts last week with a winning goal after the siren, but the Blues will take confidence from pushing top-of-the-ladder Port Adelaide all the way.

No injury list in the AFL is longer than North Melbourne’s, with captain Jack Ziebell now set to miss another month following a setback in his recovery from a hamstring injury.

Jy Simpkin is expected to play through a sore ankle and Cameron Zurhaar could return after withdrawing late last week, while Kyron Hayden faces concussion tests after his sickening clash with Richmond’s Tom Lynch.

Although everything is against the Roos heading into this clash, they haven’t lost to the Blues since 2014 and could extend that winning streak to six this weekend.

Luke McDonald has never recorded less than 20 disposals against the Blues. Considering he has played them five times since debuting in 2014, we really like this tip. McDonald has been moved into the midfield to negate opposition players, so we can expect him to be around the ball all day long as he hangs off Patrick Cripps.

Although his output has fallen in the past fortnight, Marc Murphy is still a premium midfielder for the Blues. The former skipper has only passed the 20-disposal mark three times this season, but he averages 25 in his last two games against the Roos. We think Murphy stands up this week to help get the Blues a win.

The Kangaroos struggled to get the ball past the halfway mark against the Tigers in round seven, but we saw glimpses of brilliance from Curtis Taylor when he ventured up the ground. Although he is in the running for the Rising Star this season, the young forward’s skills on the lead and in the air make him look experienced beyond his years. If he can mark the ball inside 50, you can pencil in Taylor to kick a goal.

Harry McKay only had four touches against the Saints in round five, but he has turned it around since then and become a great target inside 50. McKay kicked six goals straight in the last two weeks, so we can expect him to convert his chances on Saturday. We could see a matchup between Harry and his twin brother, Ben, assuming the latter keeps his place in the Roos lineup this week.

Both these teams have started off matches quickly in the past, although that wasn’t the case for the Roos as they went scoreless in the opening quarter last week. Rhyce Shaw will demand a fast start this time out, while the Blues – with the exception of their horror show against Melbourne – have consistently performed well early.

Even though they haven’t beaten the Roos in their last five attempts, we like the new-look Blues and think they will get over the line this week. The combination of Levi Casboult and Harry McKay will be too much for Robbie Tarrant to handle on his own, while North Melbourne’s lack of ideas going forward will cost them again.