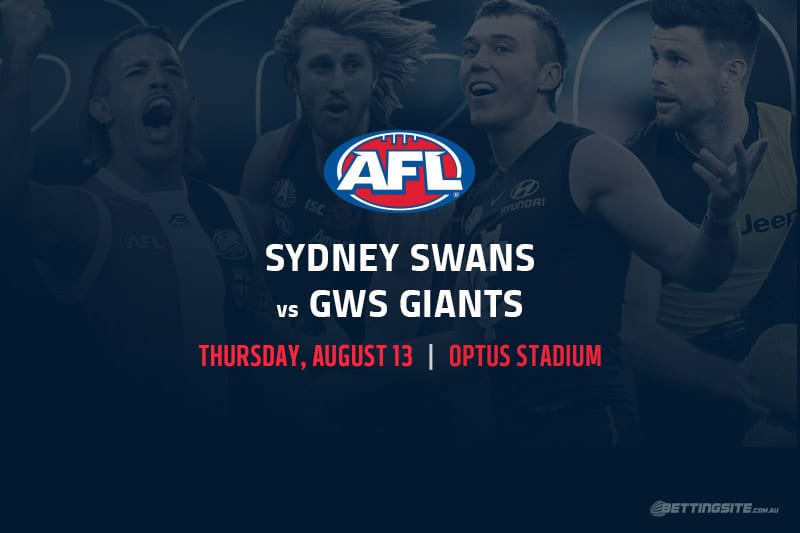 The Battle of the Bridge moves across the country as the Sydney Swans and GWS Giants face off at Perth’s Optus Stadium in round 12 of the 2020 AFL season.

Both the Swans and Giants had a bye in round 11, so they come into this clash fresh and could name a few players who might otherwise have missed out.

Good conversion early kept Sydney in the hunt against Collingwood last week, but the young group squandered some chances late as the Pies snagged a nine-point win.

The Giants flew home in the last quarter of their nail-biting match against the Bombers, kicking half of their total score in the final term to snatch a four-point victory.

Having played each other five times in the last two seasons, these New South Wales rivals should be well prepared for Thursday’s clash in WA.

Finding a disposal tip for the Swans can be very difficult, as Jake Lloyd has been the only player consistently finding the footy this season. However, Oliver Florent stands out considering he starred with 28 touches against the Giants late last year. The 22-year-old midfielder is a strong chance this week to get 20 touches, which he has already done five times this season.

Since coming back from injury in round nine, Zac Williams has been important for the Giants with his hard running and quality kicking. He has a great track record against the Swans, finding the footy over 30 times in both 2019 clashes. Given this will be his third consecutive game back from injury, Williams should be free to play most of the game and dominate the disposal tally.

Besides the brilliant Tom Papley, not many Swans players have put their hand up going forward this year. Tom McCartin has done some good things since returning to the squad in round seven, kicking six goals in three matches before going goalless against the Magpies. With Sam Reid struggling for touch after a long injury layoff, McCartin might be Sydney’s key target going forward this week.

Jeremy Cameron and Jeremy Finlayson occupy centre stage in the GWS forward line, but Harry Himmelberg is a valuable asset who finds a way to make an impact week after week. He has kicked a goal in each of his last four matches, bringing his season total to 13. Himmelberg’s high work-rate makes him especially dangerous late in games, so the Sydney defence may struggle to keep him quiet for all four quarters.

GWS Giants to win both halves

The Sydney midfield will be without Josh Kennedy, Isaac Heeney and Sam Naismith, who have all been put on the long-term injury list. The Giants do not play half-hearted against their crosstown rivals and should win the on-ball battle early. GWS looked a bit flat last time out, so coach Leon Cameron will want to see a four-quarter performance in Perth this week.

The width of Optus Stadium will allow the likes of Lachie Whitfield and Josh Kelly to dominate the outside game, so we can expect the Giants to run all over the Swans on Thursday night. With so many big names out, it is hard to see Sydney troubling last year’s grand finalists.