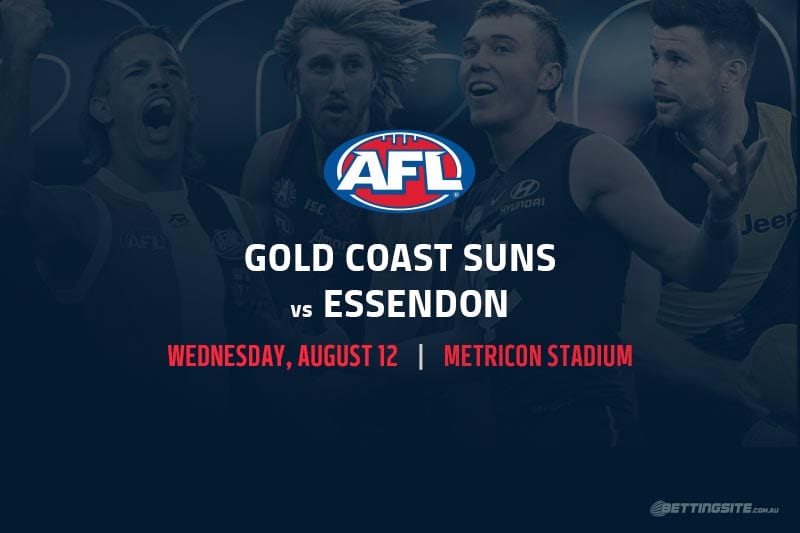 The race for the AFL 2020 finals gets tighter every week, and this Wednesday’s match between the Gold Coast Suns and Essendon Bombers could create more complications.

After losing a few close matches at home, the rising Suns will have another chance to get a win in front of their growing fanbase at Metricon Stadium.

It has been a tough run for the injury-hit Bombers since their loss to the Bulldogs in round seven, as they only just beat the last-placed Adelaide Crows a week later and then lost the following two games.

Jordan Ridley has been a great find this season for the Dons, but the young backman suffered a rib injury in the narrow defeat to the GWS Giants last Friday.

John Worsfold said he expects Ridley to get up and play, but Jacob Townsend has been ruled out with concussion after his big collision with Heath Shaw.

There were no new injuries for the Suns in their four-point loss to St Kilda, but the short breaks could force them to manage players and give the likes of Pearce Hanley and Peter Wright a run.

You can’t fault the Gold Coast midfielders this season, and Touk Miller has been the pick of the bunch since first-year star Matt Rowell went down injured in round five. Miller had 32 touches in his last game against the Bombers and was very strong against the Saints in round 10, so we like him to pass the quarter-ton in this one.

Dylan Shiel is still find his feet after returning from suspension, but Zach Merrett has lifted to compensate. Two 33-disposal matches out of his last three games indicate the Essendon midfielder is running hot. Merrett averages better than 29 touches per game against the Suns and around 26 at Metricon Stadium, so he will take some stopping.

Although Sam Day has only kicked seven goals from his last 10 matches, he has been playing well as Ben King’s partner in the Gold Coast forward line. Day allows King to roam free and take marks on smaller defenders, but this week may be different. Day kicked three straight and took six marks in his last game against the Essendon defence, which is missing Patrick Ambrose and Cale Hooker this time around.

With Jacob Townsend ruled out alongside Jake Stringer, Jayden Laverde, Orazio Fantasia and Joe Daniher, there aren’t many forwards left standing for the Bombers. Shaun McKernan is the main man inside 50, but he hasn’t kicked a single goal since round five. McKernan booted four in his last clash with the Suns and should be the focal point again this Wednesday.

Round 11 has been filled with high-scoring matches, and we believe this clash will follow the trend. The Suns and Dons put 202 points together in their last clash, while Gold Coast and St Kilda totalled 152 in round 10 despite some missed opportunities. The Bombers will lift their scoring output in perfect conditions at Metricon Stadium this week.

Watching the Suns last round gives us great confidence in them moving forward, as they scored well against one of the form teams in the competition. The Bombers are averaging only 50 points per game in their last three and have too many injuries to combat Gold Coast at home.