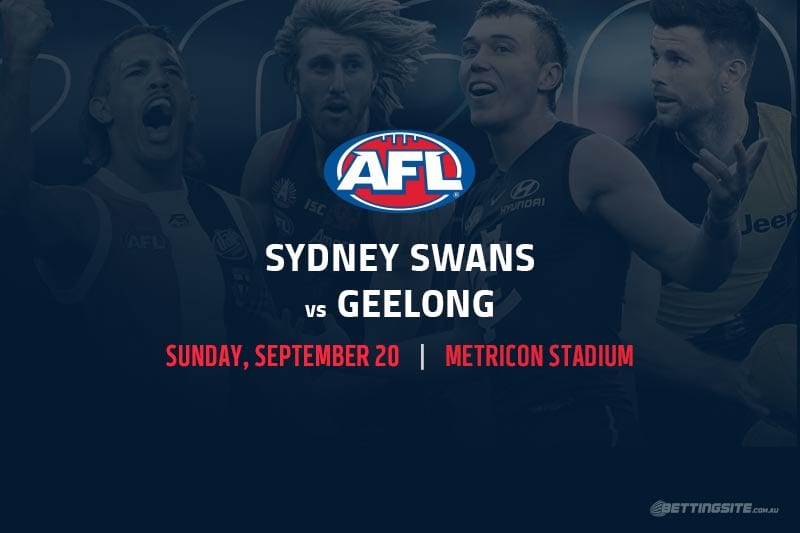 Sunday afternoon’s clash at Metricon Stadium will have plenty of interested onlookers pondering how the returning Geelong Cats stars will go first up after a stint on the sidelines.

Geelong look primed to have a deep September run and will not want to cough up a double chance with a slip up against the Sydney Swans.

John Longmire’s men are coming off a tough performance when overrun late by the Brisbane Lions on Monday night in Cairns, and they will be looking to prove a roadblock in Geelong’s finals plan with a typical Sydney performance on Sunday.

The Swans are lacking up forward, and that may prove costly against this talented Cats outfit.

Geelong will be looking to bounce back from a poor performance against fellow premiership contenders Richmond with a resounding win over Sydney. They seem to match up perfectly with Sydney, as they look to have them covered at both ends of the ground. Tom Hawkins may look to end his Coleman Medal-winning year with a big bag against this undermanned Swans defence, while the mosquito fleet of Ablett, Luke Dahlhaus, Gryan Miers and Jack Steven will look to pounce when the ball hits the ground.

Sam Menegola is having a career-best year and was one of the Cats who appeared to put in a half-decent shift last week against Richmond. He has been doing as he pleases throughout the season and averages just under a goal a game. He has kicked two goals in a game on four occasions this season and looks well placed to do it again this weekend.

Despite only getting to 20 disposals once this year, Brandan Parfitt has seen his midfield minutes improve with Geelong missing some key personnel over the course of the season. He may see them decrease with the return of Selwood, Ablett and Steven, but Parfitt has been super consistent of late and may fly under the radar of the Swans.