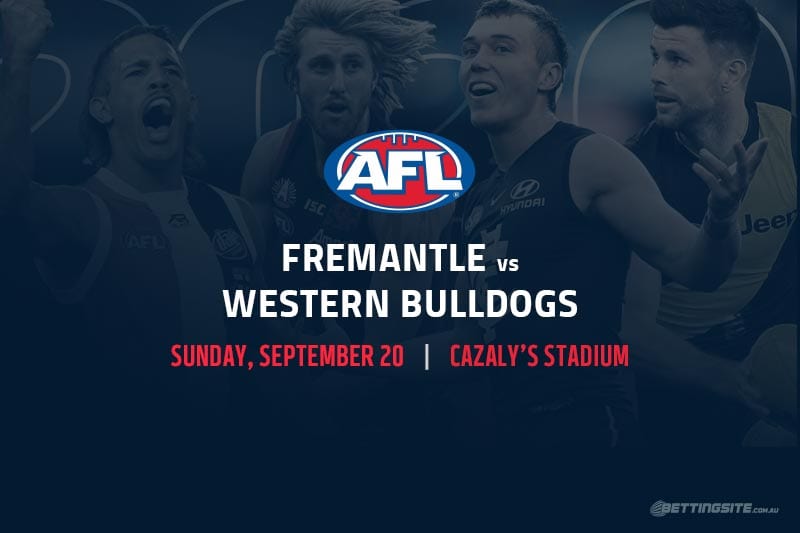 You won’t find a bigger Sunday night clash than this contest at Cazaly’s Stadium between the Fremantle Dockers and Western Bulldogs.

The equation is simple for the Bulldogs: win this week and make the finals, or lose and wait until 2021.

Justin Longmuir has done a terrific job with Freo in his first season as head coach, putting seven wins together and beating a few finals-bound teams along the way.

After smacking the Kangaroos by 64 points in round 17, the Dockers are in ripe form to cause a massive upset and shape the top eight.

Toby McLean went down with an ACL injury against the Hawks last week, but former Bulldogs captain Easton Wood will come back and provide a cool head in defence.

Griffin Logue and Reece Conca are pushing for selection, but the Dockers will more than likely go in unchanged.

Nat Fyfe has put on four consecutive clinics against the Western Bulldogs, getting over 30 disposals in each and recording a career-high 43 touches against them in 2018. The dual Brownlow Medal winner hasn’t been as influential as usual in the midfield this season, only passing 25 touches twice, but we can confidently back him in to get over 20 against his favourite opponent.

The main factor that will help the Bulldogs beat the Dockers is contested marking. Nobody takes a better contested mark for the Doggies than Aaron Naughton, who has been unstoppable at times in his first three AFL seasons. Naughton must dominate the air this week and convert his set shots if the Doggies want to make sure of this one.

Even though the Dockers have won four of the last five clashes between these teams, we are confident that Luke Beveridge’s Bulldogs will not let this chance slip through their fingers. Marcus Bontempelli and Jack Macrae will overwhelm the Fremantle midfield and get the Dogs their 2020 finals berth.