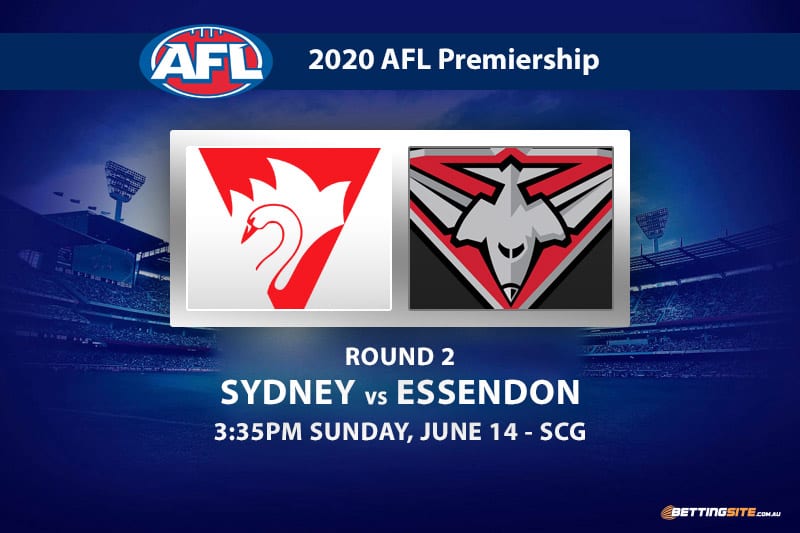 A small rivalry has been brewing over the past few seasons between the Sydney Swans and Essendon Bombers, making this Sunday’s clash at the SCG one to look forward to.

It wouldn’t be a 2020 event without some drama leading into it, and that is exactly what the Bombers have found out due to a COVID protocol breach.

Brandon Zerk-Thatcher will miss this game due to a self-reported incident of simply having a friend attend his house, resulting in a one-match ban under the AFL’s isolation rules.

Both teams will miss their best forwards as Buddy Franklin and Joe Daniher are both out injured, while the Dons are also without Orazio Fantasia.

However, the visitors regain a wealth of experience with the return of captain Dyson Heppell and key defender Cale Hooker.

If you remember Dane Rampe climbing the goalpost last season and Essendon’s final-quarter blitz later in the year, you would understand that this match up is one to follow closely.

The shortened format favours a few types of players, including the aerobic beasts, the fast-burst players and the inside bulls that enter every contest. Luke Parker could be argued for all three categories on a good day, but his toughness in the midfield sets him apart from the competition. Parker had 30 to open his 2020 account, and we think his professionalism will see him come out strong after the extended break.

As mentioned above, fast players that can run all day are crucial in the current climate, and there are very few like Dylan Shiel in this regard. Having the most disposals in the league back in round one with 35, Shiel was a constant outlet in Essendon’s narrow win over Fremantle. If the Bombers want to beat the Swans in Sydney, they need to utilise Shiel’s pace and penetration as much as possible.

Good small forwards are always valuable weapons, but they may be especially dangerous in the first few weeks back as the big men try to find their touch and timing. Tom Papley was electric in the Bushfire Relief AFL All Star game over the summer, kicking five goals from a variety of situations. Papley looks ready to explode and could finish the year as one of the game’s very best small forwards.

Moving clubs for a second time can be difficult for some players, but it feels like Jacob Townsend has slotted into the Bombers’ system perfectly. They have struggled to find a reliable medium-sized forward that can provide a presence in the air, but the Dons may have got their man at last. Townsend made an immediate impact on his club debut, booting three straight goals in the win over Fremantle in round one.

Either team to win by less than 15.5 points

The tri-bet market has always been an underrated one in our eyes, as you can get great odds for a simple task. If you believe this will be a close game, then this is the tip for you. The Bombers and Swans have played out some nail-biters in the recent past, as three of the last five margins have been under two goals.

With injuries aplenty on both sides, there is no team at a clear disadvantage, but you have to have the Swans slightly ahead at this point in time. The home field will help the Swans as they don’t need to go through countless hassles to fly interstate, while the midfield experience of Luke Parker and Josh Kennedy will see them win this match.