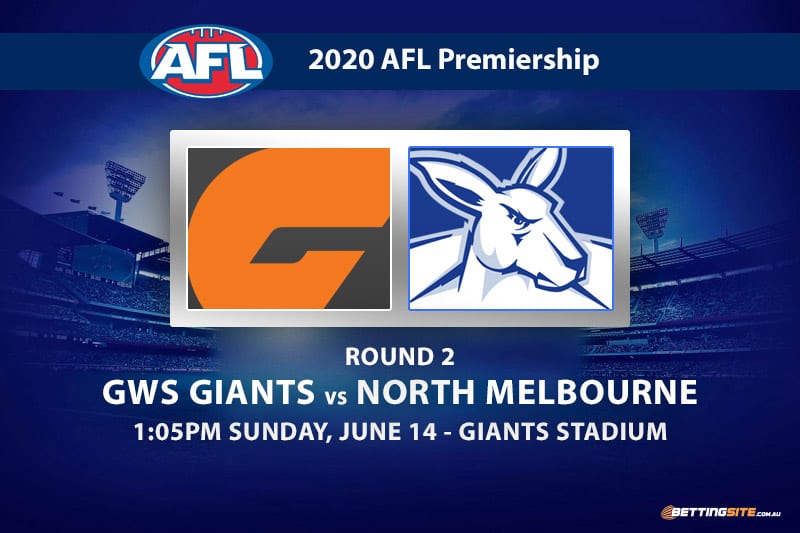 The GWS Giants will reboot their flag push this Sunday when they host North Melbourne in round two of the 2020 AFL Premiership season.

Rhyce Shaw did an outstanding job turning the Kangaroos around in half a season as head coach, but can this team in transition hang with the Giants on their own turf?

Both teams played well enough to win their round one matches, but it was GWS who impressed with a classy effort against Geelong.

The Roos were excellent in their come-from-behind victory over the Saints, but the fact they needed to come back in the first place was worrying.

Callan Ward will return for the Giants this Sunday after battling an array of knee issues, thus bolstering an already stacked GWS midfield.

The winner of this game will go to 2-0 and be in the top third of the ladder, so the importance of this game cannot be underestimated within the shortened season.

Plenty of no.1 draft picks have failed to deliver on the big stage, but Lachie Whitfield has lived up to the hype and then some. Whitfield is a great runner that knows where to find the footy and uses it well, which allowed him to average 27 disposals across the 2019 season. By the end of the day, you could see Whitfield with 30 touches and a few goals.

One asset the Kangaroos are very proud of is their talented young midfield brigade, where Jy Simpkin is one of the shining lights. Ben Cunnington and Jack Ziebell might still be the top dogs, but Simpkin is a tough inside midfielder who can find plenty of his own ball. He had 23 touches in round one, only two less than the most on the ground.

We all know Toby Greene loves to kick, whether it’s at goal or his direct opponent. We think North Melbourne lacks a defender that can match Greene both in the air and on the ground, as his big leap and secure hands make him a difficult player to match up inside 50. He kicked four goals in round one against a strong Geelong back six and could register a similar tally here.

Only one real force looms in the North Melbourne forward line at all times, and that is Ben Brown. With Nick Larkey missing this match through injury, the Roos will go to their usual suspect, and we think he has the experience and class to carry his team on the day. Brown only kicked one goal against the Saints in a scrappy win, but he will be targeted more this week.

Watching Thursday night’s match between the Tigers and Magpies opened our eyes to how scoring might be for the first few weeks back. The skills were off across the entire ground, perhaps because players have not been able to train in large groups. The Giants and Kangaroos will scrap out a low score in Sydney this Sunday.

An established squad that made the AFL Grand Final last season should not fall to the Roos this early in the season, but that’s not taking anything away from North Melbourne. We think Rhyce Shaw can take the Kangas far in 2020, but Leon Cameron’s Giants are going to be near unstoppable at home this year.