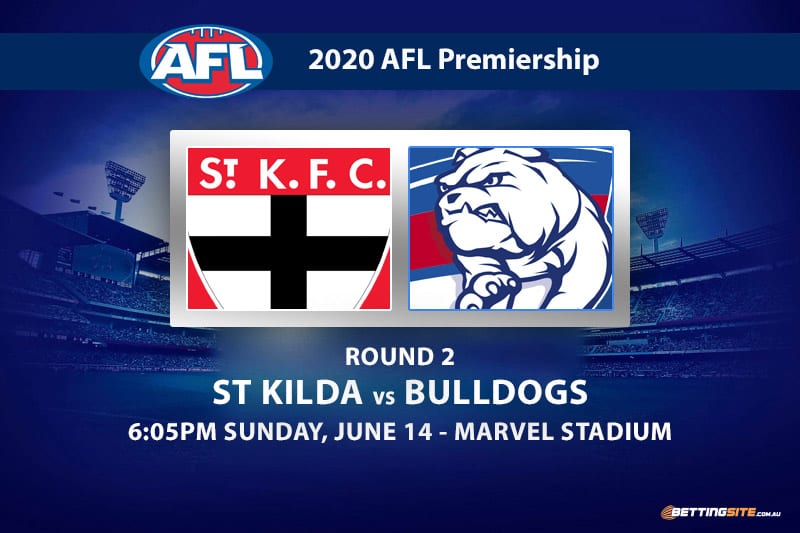 Of all the Sunday matches the AFL has scheduled for round two, we think this battle between the St Kilda Saints and Western Bulldogs at Marvel Stadium is the most intriguing.

You have the narrative of Josh Bruce facing his old team for the first time, while the loser will go to 0-2 and start feeling a hint of pressure given the shortened season.

Brett Ratten has tried to build a new brand at St Kilda, but the long break couldn’t have come at a worse time when trying to familiarise new players with a new system.

Marcus Bontempelli is one of the most popular choices in the Brownlow Medal betting this season, but the classy midfielder would have to acquire votes over the likes of Jack Macrae and Josh Dunkley most weeks.

Aaron Naughton and Max King will battle as two of the league’s brightest young key forwards, with the latter shaping a solid choice in this year’s AFL Rising Star betting.

St Kilda fans had high hopes entering the 2020 season, but if they can’t topple the Bulldogs here, they will have a tough time against the Magpies and Tigers in the following two rounds.

Jack Billings has always been heavily scrutinised because he was drafted one selection ahead of Marcus Bontempelli. The St Kilda midfielder has lived in his rival’s shadow for much of his career to date, but that could change by the end of their seventh seasons in the AFL. We think Billings is going to have plenty of opportunities to showcase his beautiful field kicking this Sunday.

The trust that the Bulldogs coaches have shown in Bailey Smith would give the second-year player the confidence that he belongs. Smith had an excellent first season and was clearly one of the best picks in his draft class. Now that he’s had the equivalent of three preseasons to build his body, the young bull is ready to start winning more and more of the footy.

This will be one of the biggest matches of Max King’s life, but the future star is ready to prove his worth to the St Kilda faithful. With two goals on debut in round one, King looked calm inside 50 and trusty with ball in hand. The big forward prospect needs to have an impact in front of goal, as the Saints are dying for a goalkicking forward to take the load off Tim Membrey. If he performs well in this match, he could boost his chances for the Rising Star award.

When you face your old club for the first time, you want to have a good day, and Josh Bruce’s new teammates will know this. The Doggies may well target Bruce early, so the $9.50 at Sportsbet for first goalscorer is worth a look. The former Giant and Saint has shown he can kick bags when the opportunities are there, so he should notch a couple if he gets a few looks at goal this weekend.

Defence isn’t top of the agenda for either side, as the Bulldogs value toughness through the middle and the Saints are still figuring out their brand of footy amongst half a dozen new recruits. If the forwards have a good day and both teams use the ball well ahead of centre, the scoreboard should tick over regularly. Under the roof, 10 goals each is a reachable total for both sides.

With Marcus Bontempelli, Jack Macrae and Josh Dunkley winning a high percentage of ball in the guts, the Bulldogs will have the advantage in this match. We do not think the Saints will adapt at the same speed that Luke Beveridge’s Bulldogs will, as they already have issues regarding team chemistry.