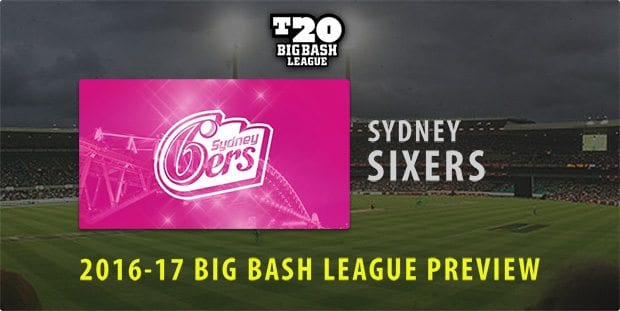 THE Sixers were long-time dominant force in Sydney cricket since the Big Bash League’s inception, but they had to take a backseat to the little brother last season.

The status quo of the Thunder collecting the wooden spoon while the the Sixers compete for the title was flipped on its head last season when the men in green won their first title while the squad in pink collected their maiden last place finish.

Crownbet.com.au has the Sixers at +650 to have the most losses in BBL06.

Will the sting of having the easy-beats of harbour-town cricket supersede them in BBL05 spur the Sixers onto bigger and better things or is Sydney now green rather than pink?

In a hot futures betting market, the Sixers are locked alongside the Thunder on the fourth line of betting at $7 at Crownbet.com.au.

Based on the market, punters are thinking the Sixers’ last season was an aberration and it is hard to disagree based on the team that has been presented on paper.

Unfortunately for the men in pink, their depth will be tested all throughout the season given a lot of their players will be called up for international duty in all three formats.

Depending on how the Australian selectors choose the test side, the Sixers more than likely will be without Josh Hazlewood, Mitchell Starc and Jackson Bird, and there is every chance that Steve O’Keefe or Nathan Lyon will be unavailable too while the longer format is taking place.

Another huge blow for the Sixers will be the exclusion Nic Maddinson, who was a surprise call up to the Australian test squad.

The key will be whether or not the duo of Brad Haddin Moises Henriques can perform with the willow. Both men have shown they are world class batsman on their day but they both have the tendency to be more mercurial than consistent.

The Sixers will be buoyed by their last minute recruitment of England ODI and T20 international representative Sam Billings.

An explosive hitter, Billings will be a welcome addition to the team that lacks the batting prowess of other teams.

Sixers coach Greg Shipperd said Billings adds plenty of flexibility to his team given he can be placed behind the stumps or in the outfield.

“Sam Billings becomes our second international signing and is a crucial addition to our ranks given the selection of Nic Maddinson and the possibility of other Australian selections,” Shipperd said.

“Recent international performances have whet our appetite that his explosive and creative style of batting will nicely suit our line-up.

“Sam can bat anywhere in the order and we like that flexibility in our players. Also his fielding is highly rated both as a keeper or outfielder.

Good judges from England, Pakistan and the IPL have seen the potential in Sam and we welcome him to our squad.”

If the Sixers can weather the early season storm and put together wins while their top-tier talent is away on international duty they could be in title contention. If not, their BBL06 odds will blow out to double figures quicker than you can say howzat.

The Sixers campaign starts with two games in three days – the Sydney derby against the Thunder (December 20) before hosting the Hobart Hurricanes at the SCG (December 23).

All markets provided by CrownBet.com.au

Dan Hughes – The 27-year-old has had an enormous 12 months and looks to be the Sixers best batsman coming into BBL06. His first class record since October has seen him score 122, 96, 54 and 52 and Hughes is justifiably at the top of the market ($4 at Crownbet.com.au) to score the most runs for the Sixers this campaign.

Brad Haddin – Haddin will enter BBL06 one year shy of his 40th birthday, and he will need to draw on all of that experience if his side is to make an impact in the 2016-17 campaign. At his absolute best he is still one of the hardest hitters in world cricket. If he can find some consistency throughout BBL06 the Sixers will be well placed.

Sam Billings – Pressure is typically heaped upon international recruits in the BBL, but Billings may fly under the radar a touch given his last minute inclusion. The 25-year-old harbours hopes of being included in the England Ashes squad and it all starts in BBL06. Billings is a heavy-hitter who can score quickly and represents great value at $7 to be the Sixers’ top run scorer at Crownbet.com.au.

Stephen O’Keefe – It is likely that O’Keefe will take a backseat at the international level (at least throughout the test series) to BBL teammate Nathan Lyon, so we think he will approach this season with a chip on his shoulder. On the second line of betting at $4 for most Sixers wickets, we are hard pressed figuring out why he is not at the top of the market, but we will take the odds.