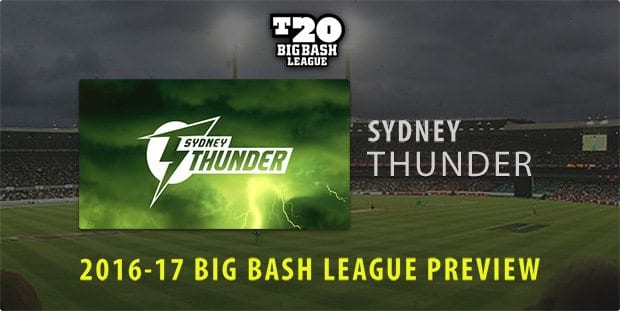 The key last season was spreading their money evenly, rather than lashing out on big name players and guys who are highly unlikely to ever suit up in the domestic competition – Dave Warner anyone? – and the strategy paid dividends.

This season the Thunder will be without former skipper and one of the best Twenty20 batsman of all-time, Mike Hussey, and South African stalwart Jacques Kallis, but the men in green have spent the extra allotted money wisely.

Former England captain Eoin Morgan returns to the Thunder after a two-year absence. Morgan is one of the best T20 batsman in the world and will be a welcome addition to the squad. Joining Morgan is English compatriot James Vince, who adds versatility with both the bat and ball for the Thunder.

The big issue for the defending champions will be the unavailability of their players.

Usman Khawaja’s absence due to international duties early in the campaign will hurt, but the prospect of having firebrand game-changer Andre Russell potentially out for the season could make-or-break the Thunder’s campaign.

Russell is facing two-year ban for failing to properly inform drug authorities of his whereabouts on three or more occasions, but Thunder chief executive Nick Cummins said the 28-year-old is taking every step necessary in order to prove his innocence.

“I’ve spoken to him a couple of times over the journey. He feels like he’s done everything he can,” Cummins said.

“He attended the hearing in-person. So he’s taking it very seriously and wanted to make sure that was noted.

“He’s kept himself pretty busy over the year playing in various tournaments… (but) I think in the back of his mind it’s always there.”

Just when the Thunder thought things could not get much worse, injury news came through that captain Shane Watson will miss almost all of the 2016 Big Bash fixtures after straining his left calf.

Thunder medical staff said it will be at least Christmas before we see Watson in green again in 2016.

Cummins said the experience of overcoming last year’s hurdles to claim their maiden trophy will hold them in good stead coming into BBL06.

“That’s a challenge, no successful campaign goes through without setbacks, we found that out last year,” he said.

“We lose a bit of flexibility with Watto being an all-rounder and the leadership. I’m disappointed for him but he can still play an important role.”

The Sydney Thunder shocked the cricket community last season to lift the BBL trophy, but they will need all the luck they had in that campaign and then some if they are to repeat the feat in 2017.

Thankfully for the reigning premiers the adage ‘lightninzg never strikes twice’ does not apply as the men in green hope to create a back-to-back Thunder clap in BBL06.

The Thunder’s campaign kicks off in hectic style as last year’s champions play Sixers in a huge Sydney derby (December 20) before travelling to Melbourne to face the Renegades just two days later (December 22).

All markets provided by WilliamHill.com.au

Andre Russell – Andre Russell is one of the most dynamic and game-altering players in the BBL, and it seems the only potential thing that could derail his season is a doping ban.

The 28-year-old is brilliant with both bat and ball and could easily top both the batting and bowling categories for the Thunder.

Clint McKay – After finishing BBL05 as the top wicket taker for the entire league, McKay returns to the Thunder aiming to replicate those feats this season.

The 33-year-old Melbournian finished two scalps clear of his closest rival league-wide and we are more than happy to take the $3.75 on offer for the quick to top the wicket charts for the men in green.

Eoin Morgan – The Irish power-hitter returns to the Big Bash League after two years away from the competition, and he will be lent on heavily to make runs all throughout BBL06.

The former England captain will be a mainstay in the Thunder squad early in the tournament while others are injured or out due to international duty, and while he should get a call up to the English national team as the BBL progresses $10 to top score for his side at WilliamHill.com.au is a huge price for a man who possesses Morgan’s batting prowess.

Kurtis Patterson – The reliably brilliant Kurtis Patterson has been magnificent for NSW over the last two years in the domestic competition, averaging almost 50 runs a match which almost saw him gain Australian selection.

Australia’s loss is the Thunder’s gain as Patterson will be available for the entirety of BBL06, and he looks to be the best value bet at $4 at WilliamHill.com.au to top score for the men in green this season.