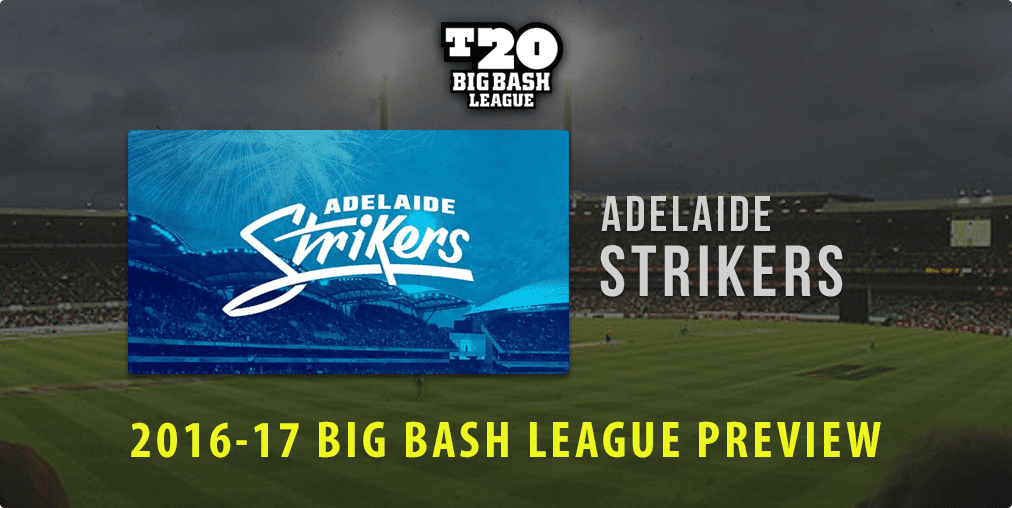 Twice in a row Adelaide Strikers have topped the Big Bash League table, reached the final and failed to take out the title.

Will it be third time lucky for Brad Hodge and company?

The punters don’t seem to think so.

Only Hobart Hurricanes, at $10, are rated a lesser shout.

Yet the Strikers have retained much of the squad that got them to the big dance in the last two Big Bash League seasons.

Star spinner Adil Rashid will miss at least the start of the season due to international commitments, so Jon Holland and Travis Head will have to step up in the slow bowling department.

Sussex seamer Chris Jordan comes in to provide some pace (and very handy lower-order hitting) alongside Ben Laughlin, Michael Neser, Kane Richardson and Billy Stanlake – one of the breakout stars in BBL05.

Jordan is currently signed up for only the first two games of the season, but he will become a full squad member if Rashid is picked for England’s ODI series in India.

“Chris is an allrounder who has represented England with distinction and we are delighted to have secured his services,” said Strikers coach Jason Gillespie when the deal was announced last week.

“He bowls very good pace, is renowned for taking early wickets and he is also known for his death bowling; and he’s also one of the best fielders in the world.

“He’s a quality cricketer who has all three strings to his bow, and we’re extremely excited to be welcoming him here to the Adelaide Strikers.”

We may finally get to see something of West Indies all-rounder Kieron Pollard, who has hardly featured in recent seasons due to a combination of international duties and injury.

The Strikers have also brought in Ben Dunk from Hobart and young glovesman Alex Carey, so there is plenty of competition for Tim Ludeman in the wicketkeeper-batsman slot.

Of the Dunk deal, which saw young bowler Hamish Kingston head to Tasmania, Adelaide GM Bronwyn Klei said: “To sign a previous Australian T20 representative and a former player of the tournament is really exciting for our fans, and gives our squad great depth and an injection of experience.”

The South Australian franchise will be among the busier sides in the opening weeks of the 2016-17 Big Bash League T20.

Their campaign starts with two games in three days – at home to Brisbane Heat (December 21) and then away to Perth Scorchers (December 23).

All markets provided by CrownBet.com.au

Jake Weatherald – So far, so good for South Australia’s gifted opening bat. The 22-year-old has a pair of tons already in his second season of state cricket – a blistering 141 in the Matador Cup and 135 in a huge win over Tasmania in the Sheffield Shield – and averages over 47 against the white ball at a strike rate of 108.81. We eagerly await his Big Bash Twenty20 debut.

Travis Head – Steven Smith and David Warner may have stolen the show, but this guy was mighty impressive in Australia’s 3-0 win over New Zealand in the Chappell-Hadlee Trophy. Head’s last five innings in all formats have produced scores of 130, 52, 52, 57 and 37. The only issue from a punter’s perspective is his likely selection for the Pakistan ODI series in January.

Jake Lehmann – The son of Darren wrote his name into Australian cricket folklore last season with that incredible match-winning six against Hobart on his first bat in the Big Bash. He’s no one-hit wonder, however, with five first-class tons to his name in only 21 appearances. He is a danger man in the middle order and, alongside Head and Weatherald, a shining light for South Australian cricket.

Chris Jordan – Born in Barbados but honed in Surrey, Jordan is a true allrounder who possesses more than a little of that classic West Indian flair. He takes wickets, he makes runs and he’s one of the very best in the field. With Rashid every chance to make England’s ODI squad for India, Jordan could be well worth a punt for top bowler at BBL06 ($41 at William Hill).