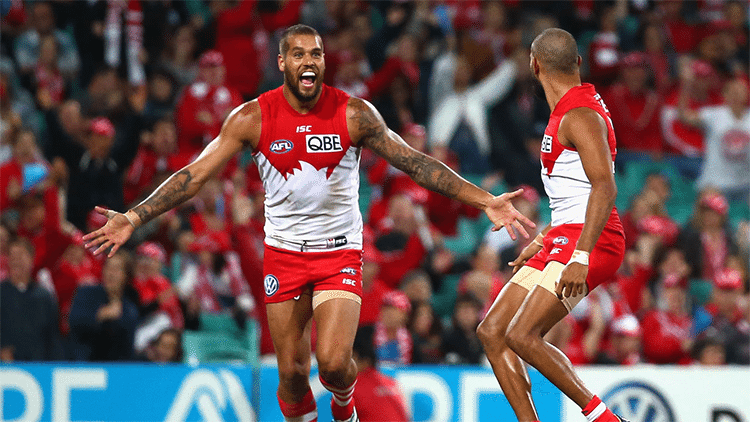 SYDNEY’S big Friday night win over Hawthorn has prompted Sportsbet.com.au to move the Swans into joint favouritism for the flag alongside Geelong at $5.

The Swans – who started the round as $6.50 third favourites for the premiership – bounced back from their disappointing loss against Richmond in the previous round to record a consummately professional win, allaying fears that their contested brand of football will get exposed on the MCG.

Daniel Hannebery was again best afield for his side.

The prolific Swan amassed a game-high 33 disposals to extend his tremendous streak of 30-plus possession matches to five, further strengthening his Brownlow Medal credentials.

After starting the season as a $26 outsider, Hannebery’s odds and incrementally shortened throughout the year, and after his Friday night performance the 25-year-old is now the $8 second favourite behind Geelong’s Patrick Dangerfield ($3.50)

Sydney coach John Longmire praised his team’s efforts in the aftermath of the match.

“You never get to a point where you will crack it open against Hawthorn, or very rarely because they’re such a good team,” Longmire said.

“They keep coming, and we knew they would come and have their turn … their pressure was enormous in the third quarter, but we sort of kept them to three goals, and then went back again in the last.”

Geelong – which started the round as $4.50 favourites for the flag – was the big loser of the weekend, falling to Collingwood by 24 points on Saturday afternoon.

The win leaves the Pies just four points adrift of eighth-placed Adelaide, but the market does not believe Nathan Buckley’s men are capable of making the finals.

The loss was only the second defeat of the season for Geelong.

The Cats were left to rue several gilt-edged opportunities that were not taken in front of goal, extending their poor conversion rate to eight straight games where they have kicked over 11 behinds for the match.

Geelong coach Chris Scott said his side’s conversion rate is cyclic and will improve as the year wears on.

“We’ve just got to keep working on it. What I won’t do is get frustrated. We get frustrated in the moment as all the fans do, but we’re not going to throw our hands in the air and say ‘this is getting the better of us.’

“We’re just going to do the work.

“We don’t have guys with massive technical issues in our kicking action. We’re just going through a phase at the moment where we’re not finishing off our hard work. If you continue to do that over a long period of time, you’re just a poor side.”

Sportsbet add some spice to the Coleman medal market

Punters may be looking at this year’s Coleman medal race as a one man affair given Lance Franklin is as short as $1.90, but Sportsbet.com.au have elected to add some excitement to the goal kicking market.

Sportsbet is offering $7 for any player in the AFL to kick 100 majors in the regular season, a mark that is in serious danger of being passed if Franklin can maintain his current form.

Franklin is the last man to surpass the 100-goal mark in a regular season, hitting triple figures for the Hawks back in 2008.

If Buddy can continue his goals per game average of 4.11 for the remainder of the season he will come close the magical mark, but ex-Hawthorn full forward Jason Dunstall believes he will need to kick a few big bags along the way if he is to hit triple figures.

“He is playing brilliantly and kicking his fours and fives, but you have to have some eights and 10s to fall back on,” Dunstall said.

“There will come a day where there is terrible weather or he has a bad day or misses a game through injury or the Swans rest him in the lead-up to finals.

“You can’t rely on kicking the average you need week-in and week-out. There are going to be ups and downs.

“You need the odd bag to give you some breathing space. It doesn’t matter who you are, you are going to have off days.”

Sportsbet open market on when North’s first defeat will come

North Melbourne’s nine straight wins to start the AFL season has prompted Sportsbet.com.au to open a new market on when its first loss will occur.

The Swans are the first cab off the rank and shortest priced favourites to end the Roos’ run at $1.40.

Geelong are the next best team at $6, and the Tigers (who face the Roos in round 11) are the only other side under double figures at $7.50.

For those North fans who believe the Kangaroos can go through the season undefeated, you can get odds of $81 on that unlikely scenario coming to fruition.