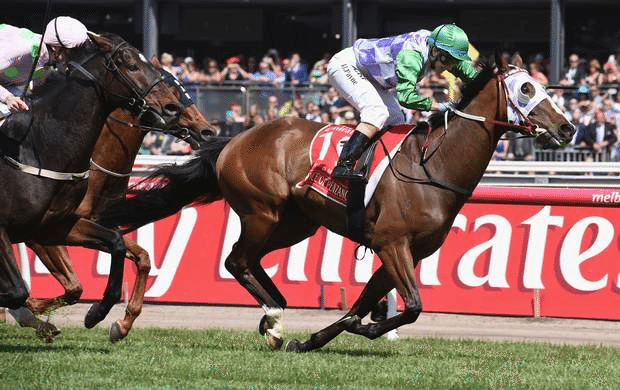 PRINCE Of Penzance returns to the track for the first time since its 2015 Melbourne Cup victory Saturday as an $11 outsider at Sportsbet.com.au for the Group 3 RA Lee Stakes at Morphettville.

The Darren Weir trained six-year-old gelding will again partner Michelle Paine after the unlikely combination saluted in the race that stops a nation at incredible odds of $101 last year.

While a winning return to the track would help enhance the legacy of the already distinguished horse, most punters will be more interested in the champ’s odds for a second consecutive Melbourne Cup win in November – it currently sits at $41.

Sportsbet representative Will Byrne thinks that while a winning return on Saturday is unlikely, it would be foolish to write off the Weir runner given the Prince’s penchant for the upset.

“The 1600m will probably be too short for Prince Of Penzance, but he should be running on strongly,” Byrne said.

“He’s an outsider but you can’t write him off because he’s defied the odds before.”

This is expected to the only time we see Prince Of Penzance before spring.

Trainer Darren Weir – who put the 2015 Melbourne Cup winner through its paces at Warrnambool at the beginning of the month – believes his horse is well-placed to make a positive return.

Prince Of Penzance worked alongside stablemate and Saturday combatant Tall Ship, and Weir said he was impressed by the Group 1’s turn of foot over the latter stages of the workout.

“I thought they both stretched out great the last 600m.

“They were a little bit slow early but they’re both in beautiful order and their actions looked great.

“Both horses are right where I want them to be.”

Tony McEvoy’s four-year-old Alpine Eagle is the $3.30 favourite heading into the Group 3. The Group 1 performer resumes after an eight month layoff following a cracked pedal bone that was sustained in the aftermath of a sixth placed finish in the Makybe Diva Stakes.

McEvoy said the injury should have no negative impacts on Alpine Eagle heading forward.

“We’ve had no issues at all with it,” McEvoy said.

“He’s got confidence in his action. He’s done everything really well.

“He’s been a bit bored because he’s been in a long time. He came across to Melbourne and won a trial at Werribee. Then I took him back to Adelaide and he won a trial.

Much like Prince Of Penzance, Alpine Eagle is expected to skip the remainder of the winter dates, instead focusing on a spring campaign after Saturday’s race.

McEvoy believes his horse needs to shake off the racing rust as soon as possible after the long layoff.
“He’ll just have this race and then I’ll sweeten him up for a few weeks and we’ll target the spring,” McEvoy said.

“He’s a colt and he’s one of those horses that doesn’t enjoy spelling. He loves it for a couple of weeks and then he stands in the corner and he doesn’t want to be there.”

Mark Zahra will take the ride on Saturday.

McEvoy said that while he expects the long layoff to take its toll on Saturday, he is still giving Alpine Eagle a shot of winning its second group race after taking out last year’s Group 2 Autumn Classic.

“He’ll be very ring rusty, but I hope he can step up and run well for us,” he said.