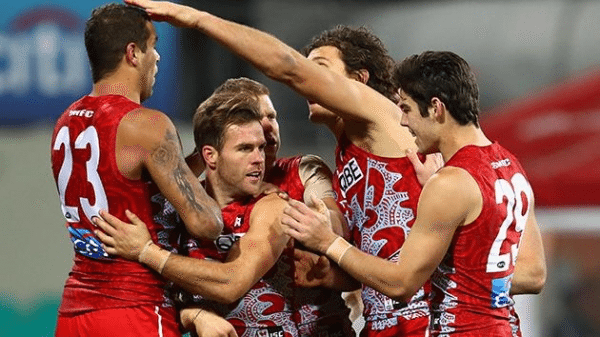 SYDNEY is the $4.50 outright favourite for the 2016 Premiership at Sportsbet.com.au after sweeping aside the previously undefeated North Melbourne by 26 points on Friday night.

The Swans were lead magnificently by the $1.90 Coleman medal favourite Lance Franklin, who booted three goals and Daniel Hannebery, who amassed 34 pivotal possessions.

The dynamic Swan midfielder has averaged over 30 disposals in 2016 and is now the $6 second elect at Sportsbet to win the Brownlow medal.

Former Sydney star and current ABC analysist Tadhg Kennelly believes the stars are aligning this season for the red and the white.

“It’s all sitting pretty for them at the minute and they won’t want to hype them up. I think they’ve got under the radar of a lot of the clubs and people in Melbourne,” Kennelly said.

“I said this earlier in the week, that I think it’s Sydney’s [premiership] to lose … all the teams have fallen in line for Sydney as far as the year is panning out, it’s early yet, still only round 11 but I think it’s been primed for them.

“Their players are healthy, they have maturity in their list, the debutants, the list is getting stronger, the Buddy factor, the Tippett factor, I am biased.”

The big losers out of the weekend was Geelong.

The Cats were shocked on Sunday by Carlton, which was able to overcome losing Marc Murphy early in the contest to record an impressive 19-point victory.

Chris Scott’s men always looked within reaching distance of the win, but the Blues kept their three goal buffer for the majority of the final quarter to win their fifth match of the season.

The loss saw the Cats drift from joint favourites for the flag out to $6 at Crownbet, and they could drift further in the market if they are unable to reverse their form in the next three weeks against the Giants, Kangaroos and the Western Bulldogs.

Despite upsetting the Cats on Sunday afternoon to place them a game and percentage outside the eight, the Blues are still huge outsiders to play finals in 2016.

Carlton has won five of the last six matches, but the market has not gained any confidence in Brendan Bolton’s men.

Crownbet has the Blues at $15 to make the finals this season.

Carlton midfielder Bryce Gibbs’ sensational start to the season has seen the 27-year-old firm from triple figure odds into $34 at Crownbet.com.au for the 2016 Brownlow medal.

The 2014 Carlton best and fairest winner was $41 at the start of the day but another push has come for the former South Australian, who now sits locked on the ninth line of betting alongside North Melbourne’s Todd Goldstein and GWS’ Callan Ward.

Gibbs began the season as $151 afterthought for the league’s best and fairest, but after setting the competition alight in the last month and a half of football the prolific Blue has seen his odds for the Brownlow sliced by over two thirds.

The AFL.com.au’s Brownlow medal predictor has Gibbs polling 11 votes from the last five matches, where the former number one draft pick has gathered 30 or more disposals in all of his team’s wins since round 6.

Former Melbourne full forward and current SEN commentator David Schwartz believes Gibbs could be the Brownlow medal leader at the ten round point of the 2016 season.

“Bryce Gibbs, he’s a man re-invented and we know he’s got sublime talent but he’s brought things to his game that I think other coaches haven’t been able to unlock.”

Geelong’s Patrick Dangerfield remains the favourite for the Brownlow medal at both Sportsbet.com.au and Crownbet.com.au at $3.75.

The Sportsbet special on the first Fremantle win rolls into round 11 after the Dockers blew a four goal third quarter lead to lose to St Kilda by 34-points on Saturday afternoon.

Fremantle will enter Saturday night’s match at home against the Bombers as the heavy favourites ($1.29) to end their 10 game losing streak, but if they are unable to overcome John Worsfold’s men the odds on both a round 14 or later win ($8.00) or winless season ($34.00) will shorten significantly.