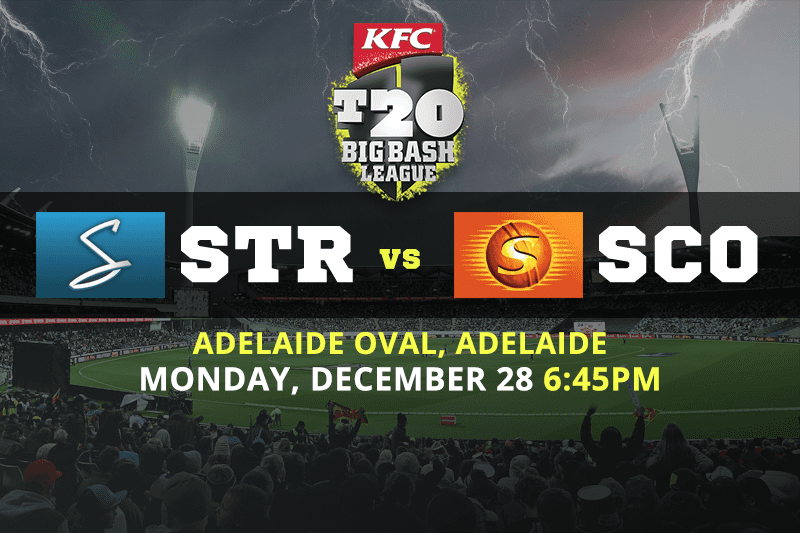 The surprise packet of BBL10 so far has been the Adelaide Strikers, and on Monday night they “host” the Perth Scorchers, a team who many would say have underperformed drastically in this campaign so far. Perth will be needing to bag their first win of the season pretty quickly if they wish to play a part in the finals series, whilst the Adelaide Strikers will need to cope with the loss of the superstar leg spinner Rashid Khan after he pulled up with a hamstring injury in their last game.

As mentioned, the Adelaide Strikers have been performing above expectations this campaign and have done so without much contribution from Alex Carey and without Travis Head who has been on Test Duties. They are coming off a nail biting victory against the Brisbane Heat, and in all fairness the Heat only really got close because of an unbelievable showing from Jimmy Pierson. With an A-grade bowling attack featuring Siddle, Worrall, Briggs, Wes Agar and usually Rashid Khan the Strikers aren’t a team you want to take on recently.

We were with the Scorchers last time out when they came up short against the Sydney Thunder, but surely a team with this many white ball stars in it can not stay down for this long. We’re expecting a blistering opening partnership with the inclusion of English superstar Jason Roy expected at the top of the order and with a decent total on the board this star-studded middle order should be able do as they please, but the start is oh so crucial.

With Rashid Khan set to miss this match with a hamstring strain, the middle order of the Scorchers are set to get a little reprieve from the Afghani leg spinner’s skill set. As mentioned before, if the Scorchers can get off to a better start, it affords Mitchell Marsh the opportunity to play his natural attacking gameplay. Coming off a hard fought 52* against the Thunder in Canberra, we’re backing Marsh to put on a decent score from number four for the Scorchers.