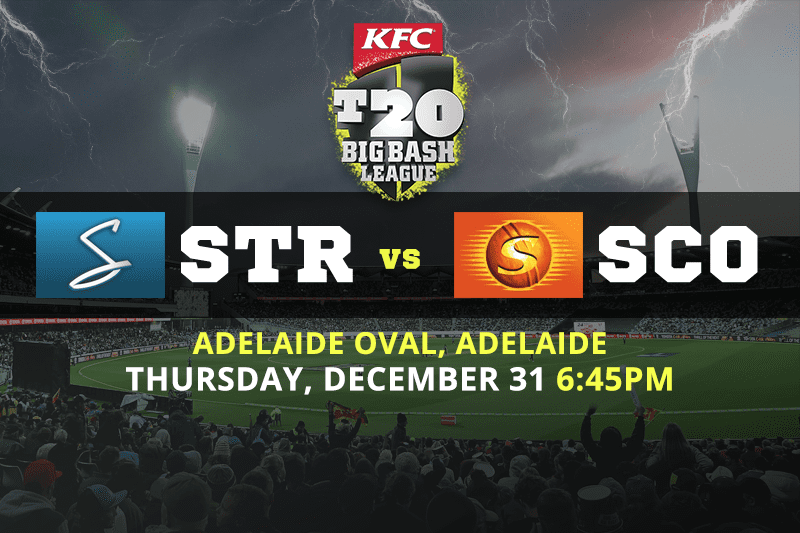 The Perth Scorchers will take on the Adelaide Strikers again this Thursday when they face off for the second time in four days.

Once again, the Scorchers will need to battle the Strikers on their home deck at Adelaide Oval, where their home crowd cheered them to victory in Monday’s clash.

A brilliant all-round effort from the Strikers saw the Scorchers done and dusted in the 15th over before tallying 100 runs, where all five Adelaide bowlers took two wickets each.

You can find this game with dead even odds with various online bookmakers, despite the fact the Scorchers are still yet to register a victory in BBL10 and the Strikers sit atop the standings.

Ladbrokes offer a handicapped market for the highest opening partnership, where they’re giving the Strikers the slight upper-hand. Considering they totalled 57 runs compared to Perth’s 35 in their recent game, the odds favour the home side. Phil Salt has thoroughly enjoyed his time in the Big Bash and should steady the ship again to open Adelaide’s innings.

Usually known for his big hitting and consistently high strike-rate, Weatherald was disappointing against the Scorchers. Even with Salt hitting all over the ground alongside him, Weatherald faced 23 balls and only made 18 runs. The powerful opener should start strong this New Year’s Eve and score a much better total, especially if he faces the same number of balls.

The young fast-bowler was arguably the best player in a Scorchers uniform in Monday’s game, tallying three wickets with a good economy. His opening over was almost a maiden if not for a wide, meaning he was locked in from the beginning. Richardson will be on the money again this Thursday since he liked the surface at Adelaide Oval.

Sitting atop the Big Bash League ladder with three wins in five matches, the Strikers have been a very strong side this season. Even with their very experienced and talented list, the Scorchers simply haven’t been up to scratch thus far in BBL10, and we don’t think their first win will come against the Strikers at Adelaide Oval.