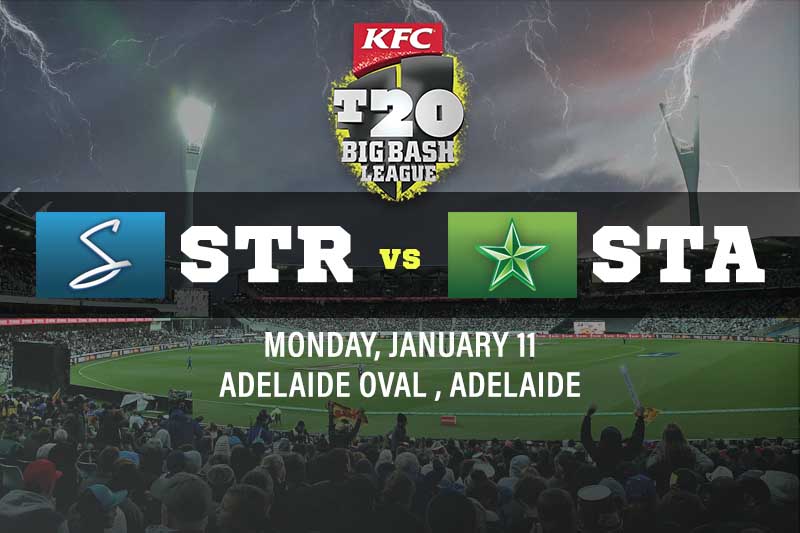 Adelaide Strikers host the Melbourne Stars at Adelaide Oval on Monday night as the BBL10 frenzy continues in the city of churches.

The Strikers will be looking to farewell Adelaide Oval in style for another year against the Stars following a last start defeat to the bottom of the table Melbourne Renegades.

The Stars on the other hand are coming off a rain-affected loss to the in-form Brisbane Heat and will look to turn around a mid-season form slump, which has seen them slump to seventh on the BBL ladder.

With both teams on the verge of playing finals, this is a must win game, and we’re set for a cracking contest between the fourth-placed Strikers and a team that simply must win.

Adelaide will feel quite disappointed after being the team the Renegades beat to snap a seven game losing streak on Friday night.

The Strikers looked to have posted a match winning score of 7/177 after significant contributions from Phil Salt and Alex Carey with the bat. They looked on track to defend the total they put up, especially when Rashid Khan spun his magic to take 2/24 off his four overs, but it was his international teammate Mohammad Nabi who smacked an unbeaten 71 from 41 balls to steal victory from the jaws of defeat.

The Stars only have themselves to blame following a defeat to the Brisbane Heat in a rain-affected match on the Gold Coast. After Andre Fletcher and Marcus Stoinis set a solid foundation at the top of the order, the Stars proceeded to lose 5/30 and never fully recovered to go down by 17 runs on D/L Method.

With the dynamic duo of Haris Rauf and Adam Zampa back together, the Stars will look to push their finals case even further with a solid performance against the Strikers.

Having been outplayed in the wet by a Brisbane Heat side full of confidence, the Melbourne Stars look well placed to pile on the misery for the Strikers when they meet on Monday night. The Stars will be hoping that their dynamic top order can lay a crucial platform and hope one of either Stoinis, Fletcher or Maxwell can anchor the innings and go big. With Adam Zampa in career best form and Haris Rauf backing up for his second game of the season, we’re confident the Stars can end an up and down form slump with an all round display against the Adelaide Strikers.

Despite not setting the world on fire with the bat in BBL10, Andre Fletcher has shown glimpses of what he is capable of, just not for long enough. Without a score of over 20 in BBL10 the Stars will be hoping he can get them off to a rapid start alongside Marcus Stoinis. He should appreciate the pace of the Adelaide Oval wicket and make a handy contribution with the bat. Fletcher is paying $2 with Sportsbet Australia.

In a rain reduced affair taking 2/7 off two overs is quite simply remarkable, and boy is Adam Zampa in some remarkable form. His bowling figure may not replicate that throughout BBL10, but he’s got the knack of picking up key wickets for the Stars, and we are backing him to do the same on his former home deck. He is paying $2 with leading Australian online bookmakers.