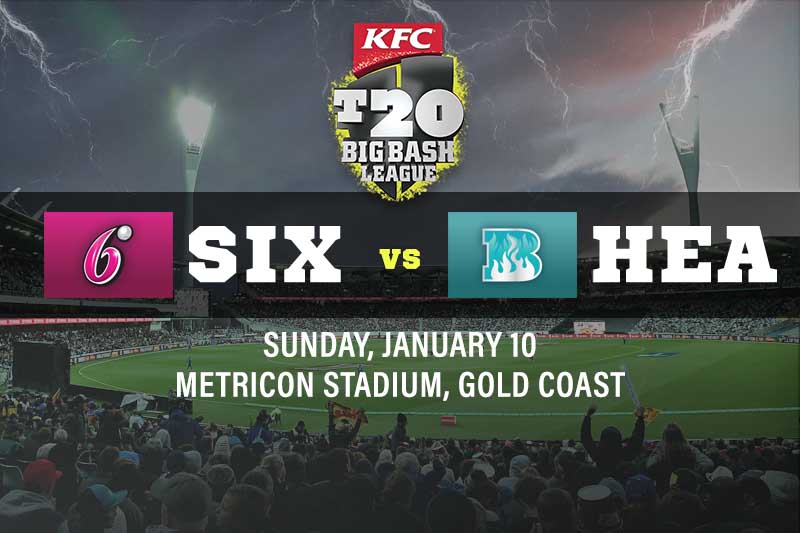 The Sydney Sixers host the Brisbane Heat at Metricon Stadium on Sunday night as the BBL10 frenzy continues.

Both sides look to match-up quite well against one another and considering the Heat got the better of the Sixers by four wickets when they met on January 2, we are set for a ripping contest to round out the weekend.

The Sydney Sixers were humbled by the Perth Scorchers on Wednesday night when skittled for 97 chasing 183. The Scorchers dominated that game from start to finish with the Sixers barely raising a yelp.

With the Sixers hold on second on the BBL10 table slipping, they need more out of Josh Philippe, James Vince, Jordan Silk and Daniel Christian as the quartet only managed to score five runs between them against the Scorchers.

Brisbane has won their past three games, with wins over the two Sydney sides, who sit 1 and 2 on the ladder, and a closely fought win over the Stars on Thursday night, the men in teal may just be timing a run perfectly.

Chris Lynn has returned from a hamstring injury and has been back to his dynamic best, forming a scary partnership at the top of the order with Max Bryant, who has been super-consistent.

With a bowling attack that just keeps on putting in consistent performances, the Heat are timing their run perfectly in BBL10.

Below you will find our best tips and betting prediction for the match between the Brisbane Heat and Sydney Sixers being played at Metricon Stadium on Sunday.

It’s hard to fathom that just 10 days ago the Brisbane Heat looked to be one of the cellar dwellers in BBL10, but with important wins over finals contenders in their last three games, the Heat are starting to become a genuine threat as finals approach. With a dynamic opening partnership in Lynn and Bryant, and a handy middle order with Burns, Denly and WIldermuth the Heat can put up a decent score within a blink of an eye. The Heat will be very hard to beat against the Sixers on Sunday night.

Max Bryant is one of the lesser known names in the Brisbane Heat batting lineup, but my no means is he a slouch with the bat. In all of his eight BBL10 games to date Bryant is yet to be dismissed for a single figure score, and we’re hoping he can again contribute from the top of the order. With scores of 40, 15 and 31 in his past three games he certainly has the form on the board.

Mark Steketee has long been known as a longer form bowler, but his form in BBL10 has been second to none in this Brisbane Heat team. He has 15 wickets for the tournament and is at the top of the list for leading wicket takers. Coming up against the Sixers and snaring a bag is no mean feat for any bowler, but we are backing Steketee to continue his impressive form on Sunday at Metricon Stadium.