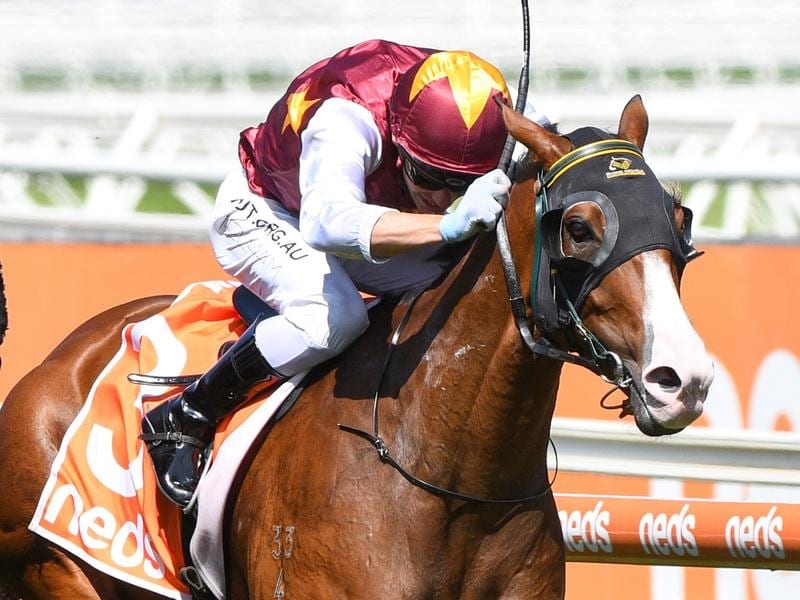 Streets of Avalon became a Group One winner with victory in the Futurity Stakes last preparation.

Streets Of Avalon is scheduled to begin his latest campaign in the Bletchingly Stakes at Caulfield on a path to Group One targets at the same track later in his preparation.

The five-year-old became a Group One winner with an upset victory in the Futurity Stakes (1400m) at Caulfield last preparation and trainer Shane Nichols is now aiming the gelding at more feature races over his pet distance.

Nichols says Streets Of Avalon is scheduled to resume in Saturday’s Group Three Bletchingly (1200m) so long as the track is not too wet, and the Mornington trainer believes the gelding has had a faultless build-up in his latest campaign.

“He thrives on the environment here and the work rider who rode him all of last preparation seems to think he’s going as good as ever,” Nichols said.

“He’s been a horse who has been able to improve every preparation over a long period of time which is not easy for horses to do.”

Streets Of Avalon, a winner of eight of his 44 starts, was given an easy time in a Mornington jump-out last week and Nichols said he was suitably fit for his return but would improve on whatever he did first-up on Saturday.

“It will be three weeks to his next assignment so he’s not ripped up by any stretch of the imagination,” Nichols said.

“He’ll be forward enough so the run doesn’t hurt him but he’ll take benefit from it.

“He’ll acquit himself OK but he’s not at his peak.”

Next month’s Group Two PB Lawrence Stakes and Group One Memsie Stakes, and the Group One Sir Rupert Clarke Stakes in September are Streets Of Avalon’s main targets because they are over the Caulfield 1400m.

“This horse can break one minute 22 seconds for 1400 metres and going into those Group Ones, if you can run that quick you’re going to finish in the forward few in a lot of them,” he said.

“We’ve just got to get him to replicate that standard and he’s going to be competitive in a lot of races during this spring.”

Streets Of Avalon is the highest-rated horse among the 14 nominations for the Bletchingly, with recent Sir John Monash Stakes winner Jungle Edge and runner-up Viridine also among the entries.