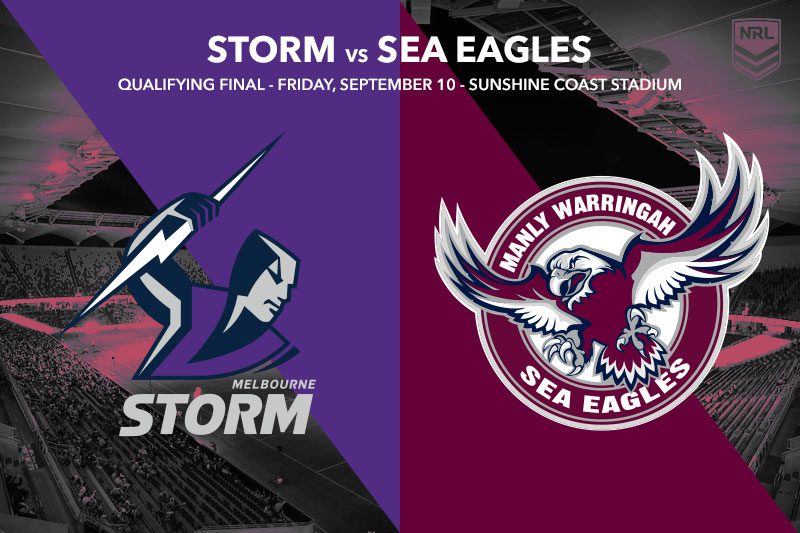 One of the NRL’s best rivalries is reignited on Friday night when the Melbourne Storm take on the Manly Warringah Sea Eagles in the First Qualifying Final at Sunshine Coast Stadium.

The Storm finished the regular season as the minor premiers and come into the game as a $1.42 favourite, but they could be without Josh Addo-Carr, who is battling a hamstring complaint, as well as Cameron Munster, who has an infection in his knee. Melbourne won 20 of their final 21 regular season games – which included a streak of 19 in a row to tie the all-time record – and should be at full strength if Addo-Carr and Munster are able to take their place in the run-on side.

Manly have emerged in recent weeks as a dark horse to win the NRL Grand Final, and if they are able to pull off the upset against their old rival, their price to take out the title will firm significantly. They have the best player on the field in Tom Trbojevic, who is enjoying a jaw-dropping season, and will be confident they can get the job done if their forward pack aims up.

It promises to be the game of the round if both teams play to their expectations.

The line has shortened by a point into -8.5 for the defending premiers, and it could come in even shorter depending on Cameron Munster’s availability, so be sure to keep an eye on that story throughout the week. The 13+ margin has normally been the play for Storm games this season, but this is going to be a close one, so it is hard to ignore the $3.20 on offer for a 1-12 win.

Ryan Papenhuyzen is at $9.50 with Sportsbet to score the first try of the match, and he is also offering some great value to back up his hat-trick with a double at $5. Brandon Smith was our hot tip for first tryscorer last week at $18 and has shortened into $15, but Des Hasler will have Manly alert to it, so it might be the game to ease off on ‘Hectic Cheese’.

Justin Olam scored a double in the last clash between these two sides, and you can get $2.40 for him to cross the stripe once again. He got the better of Morgan Harper last time, so it will be interesting to see how Manly’s young centre responds.

For the Sea Eagles to cause the upset, Tom Trbojevic is going to have to play another blinder. Hasler is a clever coach and always has great set-plays when he has had an elite fullback in his side, so there is no doubt in our minds he will have thought of ways to get ‘Tommy Turbo’ into the game against an outstanding defence. He is a tasty $12 to score the first try of the game, and if he does, you just feel like it could inspire Manly to a big win. Sportsbet will give you $18 to combine those two outcomes, and that is a great return if you think an upset is on the cards. The $4.20 for a 1-12 win to the Sea Eagles is also one to consider.

The one area where Manly hold the advantage is their left edge running at the Storm’s right, which can be vulnerable to conceding tries on the wing, and that brings a Reuben Garrick double at $7 into the mix. Haumole Olakau’atu in the back row has become a bit of a tryscoring machine in recent weeks, and punters can still get $4.50 for him to cross the line at any time, which is a terrific price given his track record of three tries in the last four games for his club.

Ryan Papenhuyzen looked as though he shook off some serious rust when he scored a hat-trick against the Sharks in Round 25, and it came just at the right time. The fullback spot for the Storm has been a headache in the weeks since his return, but there’s a big chance he has come good at the proper moment and the Storm will benefit greatly from it. Papenhuyzen against Tom Trbojevic is the best fullback battle of the weekend, and these two should absolutely light up Sunshine Coast Stadium. We’ve all seen this year just how electric Papenhuyzen can be, and just how unstoppable Trbojevic can be when he wants to. If both play their best game on the same night, it will be one we talk about for years to come.

Melbourne will win at the 1-12 margin, but the Sea Eagles will cover the +8.5 line, so fans are going to be treated to a close, gripping contest.

Ryan Papenhuyzen will continue his return to form and score a try – probably in the first half of the game – while Tom Trbojevic and Reuben Garrick will both cross at some stage. Tie those three anytime try legs into a Melbourne 1-12 win for a $24 return.