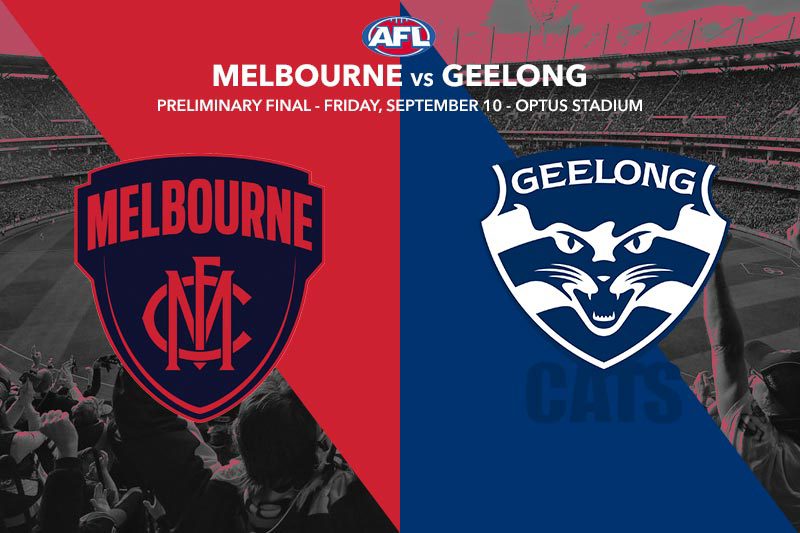 The Melbourne Demons and Geelong Cats will do battle this Friday night at Optus Stadium for a spot in the 2021 AFL Grand Final.

Simon Goodwin’s Demons advanced directly to week three of the AFL Finals Series after knocking off the Lions in their qualifying final clash, while the Cats have taken the long route to this preliminary final after losing to the Power and then bouncing back against the Giants last weekend.

Tom Hawkins has been cleared to play for Geelong this Friday after receiving a knock to his leg last weekend, but Brandan Parfitt has been ruled out for the rest of 2021 after undergoing hamstring surgery.

The Dees were unlikely to make any changes heading into this contest, until Joel Smith sustained a hamstring injury at training during the week. Jayden Hunt and Michael Hibberd are both in the mix to replace the tall defender, while Nathan Jones could also be considered for the medical sub.

Jake Lever and Steven May were extremely influential in the Demons’ round 23 victory over the Cats, as their intercept marking and transition from defence to attack was outstanding. The Cats will utilise a taller forward mix this Friday night, which could negate the impact of Melbourne’s star defenders. Chris Scott has rarely used all four of Tom Hawkins, Jeremy Cameron, Esava Ratugolea and Gary Rohan up forward, which will certainly stretch Melbourne’s backline.

One Melbourne defender who has improved his game this season is Christian Salem, who is now one of the league’s best distributors by foot. Salem provides a cool head in the back half, while he is one of the best in the business at racking up handball receives around the ground. Salem offers great value to get 25 or more touches in the major disposal betting markets this Friday night.

Although Ben Brown has only played 11 matches in a Melbourne guernsey, he will be one of the most important players in this contest. Optus Stadium is a large ground that favours a leading forward such as Brown, meaning his direct opponent in Mark Blicavs needs to stay on his toes. Brown has kicked 20.9 this season, meaning Blicavs cannot allow the dead-eyed key forward any space inside 50.

Two of the last three contests between these sides have been decided by under a goal, while their most recent bout was decided after the siren. We expect another nail-biting encounter this Friday, and we think the Demons will come out on top once again. We still think the loss of Tom Stewart is going to impact Geelong, while the Demons will basically bring a full-strength side into this game.

Christian Salem to get 25+ disposals

With an average of 25 disposals per game this season, Christian Salem is one of the most dangerous rebounding defenders in the competition. Salem is aggressive by foot and works hard to link up in the back half, which allows the crafty left-footer to find plenty of the footy. The half-back was excellent against the Cats in round 23 with 27 disposals, and we think his good form continues at Optus Stadium this week.

Christian Salem to get 25+ disposals

The Demons will win this contest against the Cats off the back of their outstanding midfield and defence. Christian Salem will see plenty of the ball as Melbourne’s chief playmaker in the back half, while Ben Brown will showcase his goalkicking accuracy with another pair of majors.