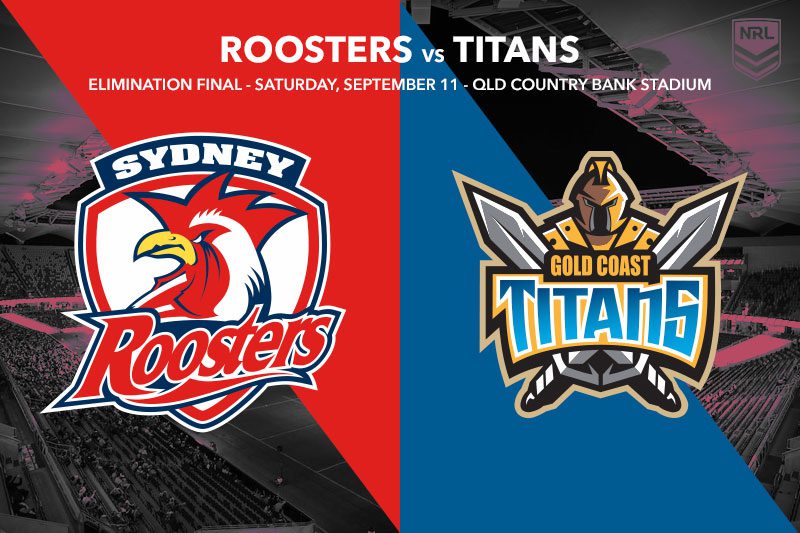 The Sydney Roosters will begin their fifth consecutive NRL Finals Series with an elimination game against the Gold Coast Titans in Townsville on Saturday night.

It will be the first of a sensational double-header, and the Roosters come in as the $1.26 favourite to keep alive their Cinderella season. They are boosted significantly by the return of Jared Waerea-Hargreaves and Victor Radley, while Angus Crichton has one game under his belt after he served a three-game suspension. Lachlan Lam has been named in the halfback jersey over Sam Walker, but unless Walker’s shoulder complaints become too much to handle, he will most likely come into the starting side in the final hour before kick-off.

The Titans have returned to the finals for the first time since 2016, needing only 10 wins to get the last spot inside the top eight. They are rank outsiders at $4 but did push the Roosters all the way with a 35-34 loss the last time they met, so they should have some belief. David Fifita has once again been named on the bench, which for the biggest game of their season seems a baffling decision. The Titans will also be boosted by the return of Kevin Proctor in the back row.

Normally a Roosters side playing in September would come in with enormous expectation from the wider public. But this has been a strange season, and the Chooks are essentially playing with house money on the back of their improbable run to fifth place with 15 players missing more than five games.

Sydney are being given a -11.5 point start at the line, and eight out of every 10 people who are having a wager on this game will want to take the $1.90 on offer there. They may be missing a lot of the big names of recent years, but there is still a lot of finals experience in this team, which will count when the game gets tight.

While the 13+ margin is still paying an even $2 at Sportsbet, Roosters fans should throw some cash on that market. Daniel Tupou is the $7 favourite to score the first try and will be the most backed by a distance.

Not since 2002 has the NRL had a team with just 10 wins qualify for the finals, and it has resulted in the Gold Coast Titans being criticised heavily as ‘not deserving’. The reality is they are worthy of their place in the top eight, and they do have the potential to cause some issues for the Roosters. Gold Coast haven’t beaten a top side all season, but if David Fifita and Tino Fa’asuamaleaui have a day out, why can’t they be in the game with 20 minutes to play?

One smokey market to look at is the half-time/full-time combination of Draw/Roosters at a juicy $17. Gold Coast are more than capable of keeping the game close and playing with emotion for 40 minutes before the class of the Roosters wins out. Jayden Campbell at $2.75 is a red-hot chance to score at any time, and whenever you can get $3.10 for David Fifita to score a try, you have to jump at it.

Footy fans should be frothing for the battle between Tino Fa’asuamaleaui and Victor Radley. The two locks have the potential to tear the game apart in the middle, and their respective teams will lean heavily on them in the tough moments. Radley has already admitted he needs to alter his tackling technique, but that feels impossible to do within a week. That becomes important because he could find himself in the sin bin if he gets it slightly wrong, and in a high-stakes game, that is certainly something that could eventuate. Fa’asuamaleaui’s ability to offload and generate big yardage through the middle is a huge asset for the Titans, and he could open up plenty of space for Jayden Campbell. Both are hugely important for their team, but they do it a little differently, so set your watch to 5:40pm Saturday evening.

For 50-60 minutes it will be more competitive than what people think it should be, but in the end the Roosters will run away with a 13+ win.

We like both Roosters wingers to score a try at any time, while David Fifita is the danger man for the Titans. Tie those three into a Sydney 13+ win for a $14.50 payout.