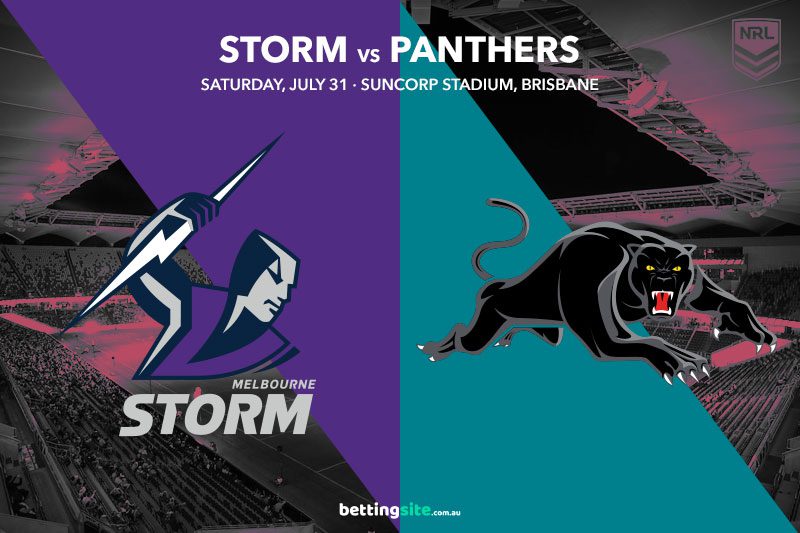 The Melbourne Storm and Penrith Panthers played out a thriller in Round 3 of the 2021 NRL Premiership, and they’ll no doubt do the same in Round 20 when they meet at Suncorp Stadium.

The Storm are on a 15-game winning streak and looking to go one step closer to the NRL record set by Penrith last year, while a win for the Panthers could mean the difference between potentially winning the minor premiership or dropping to third for the finals series.

A first-versus-second matchup is never normally this lopsided in the head-to-head betting, but the Panthers will be without Nathan Cleary, James Fisher-Harris, Isaah Yeo, Apisai Koroisau and Brian To’o. Those are arguably Penrith’s five most important players, so how much we can take away from the result in terms of predicting their chances at a premiership is going to be hard.

While Penrith are subtracting players from their gameday squad, Melbourne will be bringing back Felise Kaufusi, Cameron Munster and Dale Finucane. Harry Grant is also named in the extended squad, making him an outside chance to return to the 17.

Melbourne’s eight-point win over the Cowboys last week was the only game in their streak of 15 where they were unable to cover the line, which is just absurd to think about. They are copping a -18.5 handicap from the online bookmakers against a weakened Penrith team, so will the punters be game to get back on the horse and take that on?

Josh Addo-Carr is the $6.50 favourite to score the first try, something he has done in five of the last nine games. To have a track record of better than 50% and be still getting that return is going to have punters lining up to get a piece of that. Cameron Munster is also providing some good value as an anytime tryscorer, paying $3.40 as he looks to score in a fourth-straight game for the Storm.

Early in the season when they were on their 12-game winning streak, Penrith covered the line for fun. However, they have failed to do that in five of their last six games without Nathan Cleary, so is the +18.5 head start enough?

One bet punters should be all over is the $4.33 on offer for Stephen Crichton to score a try. Crichton has scored in four of Penrith’s last five games where they have been the underdog with the NRL bookies, so that return is hard to ignore.

Viliame Kikau is also good value at $4.50 to cross the stripe, although he will need to play with more patience than he did in the 2020 decider to create chances on the left edge. Charlie Staines is paying a tidy $5 to be the first tryscorer for Penrith and could be the beneficiary of Justin Olam’s rushing defence if it goes wrong.

When two running halfbacks take the field, it can quite often lead to magic. Jahrome Hughes and Jarome Luai are two men who have an enormous influence on their respective teams, and when they run the football they’re hard to handle. Hughes in particular is having an outstanding season and has been a headache for almost every team he has come up against. Luai was sensational in State of Origin and his last 30 club games for the Panthers have also been incredible, posing a threat to run, pass or kick for a result every time he touches the ball. On a dry track at Suncorp Stadium, just sit back and enjoy two star playmakers at the top of their game.

The statistic about Penrith not covering the line when Nathan Cleary doesn’t play is too hard to ignore, so punters should get on the Storm to salute on the -18.5 line. The Panthers will compete in patches and show the dogged determination which has them on track to set defensive records, but without their five key players they just won’t be able to rack up the points required to go with the Storm.

Storm -18.5 with Jahrome Hughes and Justin Olam to score tries and Josh Addo-Carr to score the first pays a handsome $49.75, which is just too good to pass up.