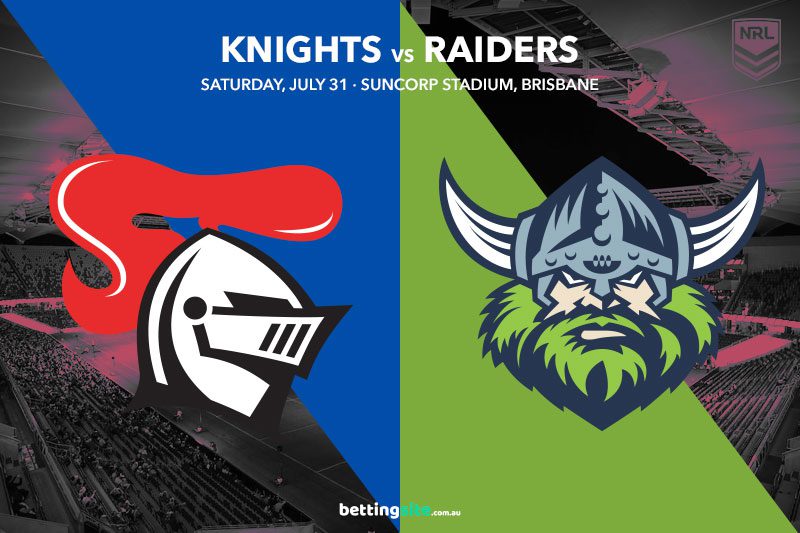 The Newcastle Knights and Canberra Raiders will meet at Suncorp Stadium on Saturday evening, and there is a sense that both teams’ seasons are on the line.

The Raiders have given life support to a dismal campaign with three wins in a row, while the Knights have had two embarrassing losses in the absence of Mitchell Pearce.

The Knights three weeks ago looked at this point of the schedule and saw six very attainable wins to end their season, but the Raiders’ win over the Eels last Thursday has thrown a big cat amongst the pigeons.

Jack Wighton will return for the Green Machine, while Pearce is named in jersey no.21 for Newcastle and no guarantee to take his place in the side as he battles a hamstring complaint.

The Raiders are the favourite coming into the game at the $1.72 price, but the market could swing in the hour before kickoff depending on who is available to play for the Knights.

Canberra do look too good coming into this game, showing a far greater defensive game than Newcastle in recent weeks.

Since the Knights have gone to Queensland with the remainder of the NRL, they’ve been labelled a ‘soft’ footy team by plenty in the media. They are 4-2 with Mitchell Pearce this season and just 3-9 without him, so the stuff he brings is not just better attacking football but also a much better attitude to defence.

Newcastle came back from a 16-0 deficit to shock Canberra in Round 9, so they should feel confident that they can upset the apple cart. The +2.5 line does look a little skinny, as they’ve only lost by single digits twice this year, which is an alarming statistic.

The two best forwards for the Knights this year have been Daniel and Jacob Saifiti, and they have both been terrific inside attacking 20. You can get north of $46 for either of them to score the first try, and they’ll be every chance, while the $6.50 for a try at any time is also terrific value. Kalyn Ponga at $2 to score at any time is also an absolute must in any same-game multi.

The Green Machine have found their groove in recent weeks, and they’d have to be looking at this game as a moment where they can set a platform for a run at the finals. The -2.5 for the Raiders is probably the most comfortable line bet of the round to take on, but there is more than enough reason to back the 13+ margin at $3.40. Newcastle have lost nine games by double digits, and if Pearce fails to take his place in the side, that price will only get shorter.

Semi Valemai shapes up as Canberra’s best option in the first tryscorer market at $10, lining up against that troublesome right edge for Newcastle. Jordan Rapana’s bounce back to his best form makes him a tryscoring threat at $2.40, and plenty of punters will take the $3.75 about Corey Harawira-Naera after tries in three of his last four games.

The hooking battle in this game is an interesting one. Jayden Brailey will play 80 minutes while having to contend with the rejuvenated duo of Josh Hodgson and Tom Starling. Brailey has been superb in an inconsistent side this year, providing excellent service and an enormous defensive work rate to cement himself as a cornerstone of the Knights side for years to come. Hodgson looked like being released just a few months ago, but he has bounced back to form nicely in a new role where he moves to lock when Tom Starling enters the game. When Starling comes in, the tempo changes and the Raiders become dangerous on the back of his sniping runs and fantastic support play. Brailey won’t get the credit he deserves sometimes, but if the Knights halves play well, it will largely be off his clean service around the ruck.

Canberra win this game 13 plus provided Mitchell Pearce doesn’t play. It’s amazing how one player can change the attitude of a team so dramatically, but the proof is in the pudding. The Jordan Rapana redemption tour kicked off last week and he will score another try in a fourth straight win.