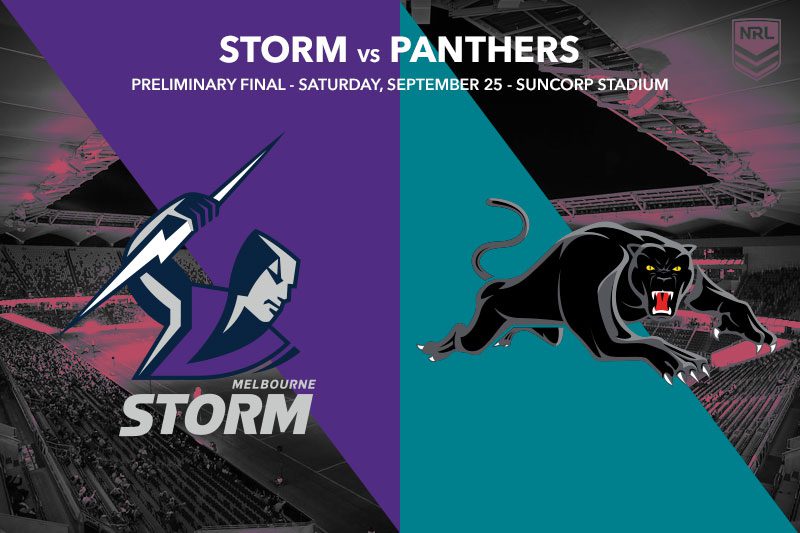 The 2021 NRL Grand Final many experts predicted all season has come a week early, with the Melbourne Storm and Penrith Panthers set to battle on Saturday afternoon in Brisbane for a place in the decider.

The Storm are the hot favourite at $1.31 on the back of their incredible record at Suncorp Stadium, where they have not lost a game in more than four years. They are well rested from a week off and have named a full-strength side, with Josh Addo-Carr being declared a certain starter after missing the 40-12 win over the Sea Eagles in Week 1. Melbourne are in the box seat to become just the second team of the NRL era to successful defend their premiership, having defeated the Panthers 26-20 in the 2020 decider.

Penrith will be sweating on the availability of winger Brian To’o, who will need to pass a fitness test on game day to take his place in the game. If he is fit to play, it will be Brent Naden who drops out of the side. The Panthers have struggled to score points in both of their finals games so far and will need to dramatically improve if they are to get the revenge they’ve been waiting 12 months for.

Beating the Melbourne Storm at Suncorp Stadium feels like an impossible mountain to climb, and that is reflected in the $1.31 favouritism. Under Craig Bellamy, the Storm are an incredible 8-2 in preliminary finals when they’ve had the week off to prepare, and punters can’t ignored that record. The $2.25 for a 13+ win to Melbourne is the market to be on if you are concerned with the Panthers attack. If that sticks to form, the Storm are only going to need to score 20 points to crack that margin, so it’s not a bad price.

Josh Addo-Carr is the $7 favourite to score the first try of the game, but the man who might get the most money come his way is Ryan Papenhuyzen at $9.50. Justin Olam at $2.70 and Brandon Smith at $3.20 are both great selections for a try at any time. Olam was overlooked for a Dally M Centre of the Year nomination, and that could spell trouble for his opposite number, while Smith is the king of the barge over from close range.

The Penrith Panthers are a classic case of why you need to win that Week 1 game, even if you have the second bite of the cherry. While the Storm were resting, Ivan Cleary’s men were dragged out into the alleyway for a street fight with the Eels and barely got across the line. The ball was in play for more than 61 minutes, which is simply staggering, and this will be a huge test of their mental and physical fitness.

The big concern for Penrith is their point-scoring, which has fallen off a cliff over the last two weeks. For a team who have scored tries at will over the last two years to only score from one miracle play and one grubber kick in consecutive weeks is beyond baffling. They are being given a +9.5 line by the top NRL betting sites, and normally you’d be thinking that’s money for jam in a close finals game, but can you trust that the point-scoring will return against a fantastic defensive side who are also the best-prepared team on a weekly basis?

Brent Naden is currently the $13 favourite to score the first try, but until he is guaranteed to play there is no point in backing him. Matt Burton at $17 is the man to get behind on that left edge for the Panthers, as that pocket of the field has been the one area where you can argue Melbourne haven’t defended well this season.

Every good team needs a scallywag, and in both of these sides it is the man who wears the no.6 jersey. Jarome Luai and Cameron Munster have an arrogance in their football that is infectious and makes their teammates better while simultaneously draining the confidence of their opposition. Luai in the first half of the season was in irresistible form but has since slumped after the State of Origin series and injury. Munster has battled to be consistently at his best due to some off-field issues, but even then he is still an incredible player. The first team to crack defensively can expect Munster and Luai to be up in their faces looking to put the foot on the throat, and it will make for must-watch television.

Melbourne will win at the 13+ margin and book their place in the 2021 NRL Grand Final. Penrith having to play a game as tough as they did against Parramatta is just too much at this time of year.

Melbourne at the big margin with Josh Addo-Carr, Brandon Smith and Matt Burton to all score a try gets you $31.25 at Sportsbet.com.au.