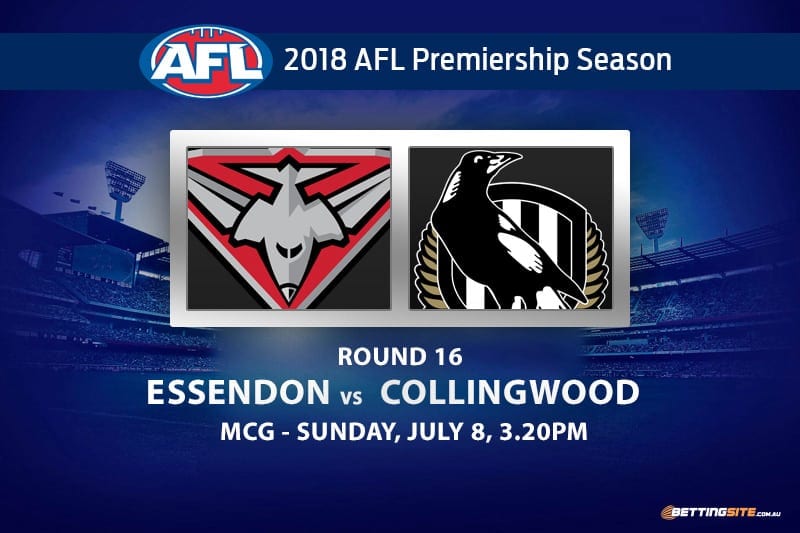 One of the most anticipated game in round 16 will be played at the MCG on Sunday when the Essendon Bombers and the Collingwood Magpies create a new chapter to their storied rivalry.

The rewards on offer for the team that claims four points makes this one a blockbuster.

The Magpies have an opportunity to jump to the first position on the ladder if the first-placed Tigers fail to beat Adelaide, while the Bombers could continue their unlikely charge towards finals after a diabolical start to the season.

When discussing injuries throughout the league, the most plagued side is Collingwood by a long way. In the past three weeks, Collingwood have sustained three season-ending injuries, the first being Daniel Wells, then Adam Treloar, and the most recent of the lot was full-back Lynden Dunn, who has suffered a tear in his ACL.

The Dunn injury leaves a crucial spot in the side that needs to be attended to, Collingwood plan to move Brodie Mihocek to fill it in. Mihocek played very well in the VFL last year as Port Melbourne’s premiership fullback.

If the Bombers bring their best footy to this match, the result will be difficult to predict.

Here are our tips for Sunday’s exciting contest.

Essendon totalled 125-points in its stunning victory over the Kangaroos last week. When they play the depleted Magpie defence, they will be very likely to score over 75 points. The sudden step-up in talent from Shaun McKernan has been a delight to Essendon fans. McKernan has been offering more than just a tall option forward, but a genuine goal kicking weapon. Orazio Fantasia has transitioned from a player with a very interesting name, to a gun small forward who can do it all. The Essendon forwards are too good to kick a score less than 75.

The only side in the league that has had every one of their forwards kick a bag in a game this season is the Magpies. Who do you stop when Mason Cox, Will Hoskin-Elliot, Jaidyn Stephenson, Josh Thomas and Jordan de Goey are all capable of kicking well over five goals in one match? It becomes a headache for opposition coaches when they all play well at the same time. The inclusion of Ben Crocker has raised eyebrows from the fans, but the young man is capable of kicking goals and taking marks. With such a versatile backline the Magpies are in a good position to score over 83.

Collingwood start matches on the wrong foot more often than not, and the Bombers are very good early in matches. We think the Bombers will be the first side to score 15-points in this match due to their explosive starts to their recent matches. If they can continue in this trend, it will be very easy for them to get the jump over the Pies.

The Pies do start quarters very slowly, but have got stronger this season as the game wears on. Whether it’s in the second quarter or late in the first, the Magpies have a special talent when it comes to running out matches. The fitter players will keep on running and make sure to impact when the quarter is nearing its end, which is what makes Nathan Buckley’s Magpies a strong side.

Steele Sidebottom to kick two goals and have 30 disposals @ $7.00

In what has been a great season for individual accolades throughout the league, Steele Sidebottom has taken the next step in his decorated career. This match will be his 200th game and we have decided to go with this Mega-bet option. Steele has kicked two goals in many matches throughout his career and is one to step up on the big occasions. This clash with the long-time rivals will be a massive outing, one where Steele will take centre stage and dominate. We believe this will be a positive week for the now veteran Magpie, who begins his transition into the latter half of his career.

Injuries do hurt teams, but when the game-plan works so fluently, they are not as devastating. We think that Bombers’ recent hot form will fade in the wet conditions at the MCG against Collingwood, who will do just enough to cover the 8-point line.