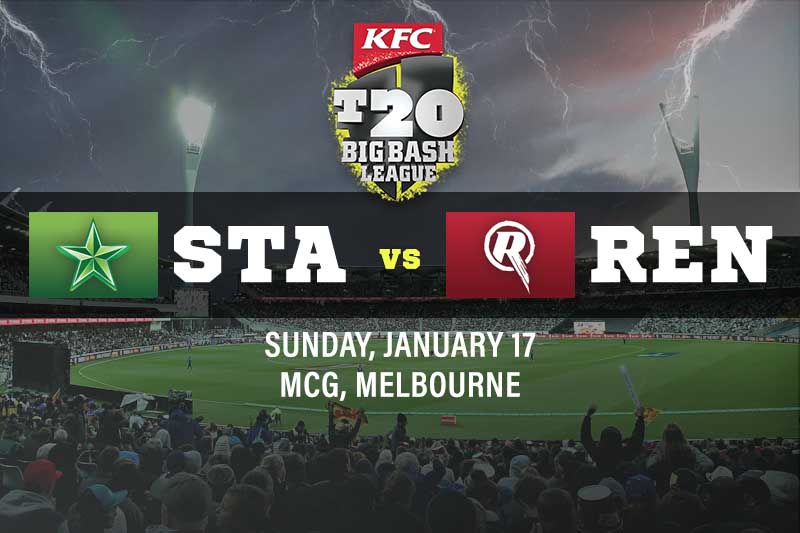 One of the biggest rivalries in Big Bash League history will be on display this Sunday when the Stars and Renegades meet at the MCG.

The two Melbourne-based clubs are both underperforming this season, sitting seventh and eighth in the BBL standings, with the Stars just ahead despite having played on less game.

Even though both sides haven’t been at their best, they both desperately need wins if they are any chance of playing in the BBL finals.

This will be the Renegade’s first game at the MCG in BBL10, while the Stars will play their first against the Adelaide Strikers on Friday night. It’s worth taking note of the Strikers v Stars game’s result before placing any bets on Sunday’s fixture.

The Stars ran away with both wins in BBL09, but their form this season has been just as poor as the Renegades, meaning this is anyone’s game.

Leading the way for the Stars this season with his leg-spin, Adam Zampa has been extremely impressive in attack. The international-level talent has taken multiple wickets in his last two outings, while he also took a couple against the Renegades last season. The ‘Gades have struggled against spin, making Zampa a great choice to lead the Stars in the wicket category.

Although his recent form has not been positive, Marsh has a beautiful record against the Stars. Whether he opens the batting or came in at three, Marsh has made big totals against his crosstown rival, topping the scoring in both BBL09 games. With most Renegades players in a form slump, we think the Big Bash veteran is the best choice to top the runs this Sunday.

There’s no doubt that the Stars have a better squad, but they just haven’t been switched on this season. We think this contest will reinvigorate the Stars’ season and see them get back to their best, as they need to win quickly to jump back into finals contention.