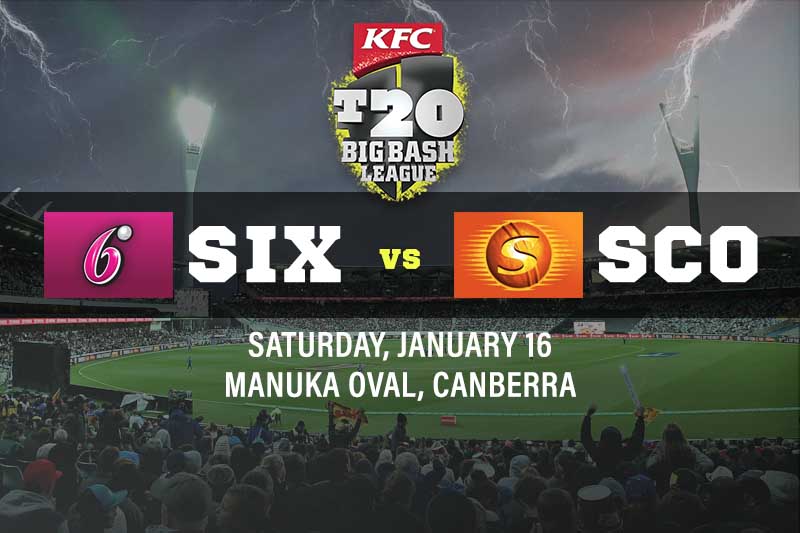 The Sydney Sixers host the Perth Scorchers on Saturday evening at Manuka Oval as two of the more in-form sides in BBL10 clash.

Both sides are coming off comprehensive victories with the Sixers getting the upper hand over their cross-town rivals the Sydney Thunder in a rain affected affair on Wednesday night.

The victory was set up by a fine spell of spin bowling by veteran Steve O’Keefe, who took 3/15 off his four overs. Jackson Bird and Lloyd Pope were also miserly and kept the Thunder in check.

The chase was never in doubt after Sixers ace Josh Philippe got them off to a flying start with a 36 ball 64 before finisher Dan Christian finished the innings nicely.

The Scorchers last outing was super-impressive, blitzing the Hurricanes and putting the BBL on notice.

The Perth team kept the Hurricanes to 5/139 from 20 overs with Jhye Richardson’s spell of 1/23 (from four overs) the key to restricting the Tasmanian team. Scorchers’ English imports Jason Roy and Liam Livingstone then put on 123 for the first wicket to put the result beyond doubt.

The Sixers are top of the BBL10 ladder for a reason, they get the job done with bat and ball and are consistent in the field.
The Sixers’ batting line-up — featuring Josh Philippe, James Vince, Jordan Silk, Daniel Hughes and finishers Dan Christian and Carlos Brathwaite — are equal to any in the BBL. They need to be at their best against the Scorchers, but they have enought talent whatever the Scorchers throw at them.

Regarded as one of the best players yet to represent Australia, Sydney Sixers captain Daniel Hughes has been in good enough form to suggest he can cover the 20 run mark. Two starts back he compiled a nice 51 against the Brisbane Heat, and has scores of 96, 46* and 32 to his name throughout BBL10. If the top of the order fails, never fear Hughes is here.

The man who has played more Twenty20 games than what we have had warm dinners, Dan Christian keeps on turning up game in and game out putting together some impressive performances. Chasing down the Thunder’s score on Wednesday night never looked in doubt but 15* off 5 balls by Christian put the icing on the cake. If DC can get a bit more time at the wicket, we’re backing him to make a handy contribution as the finisher for the Sydney Sixers.