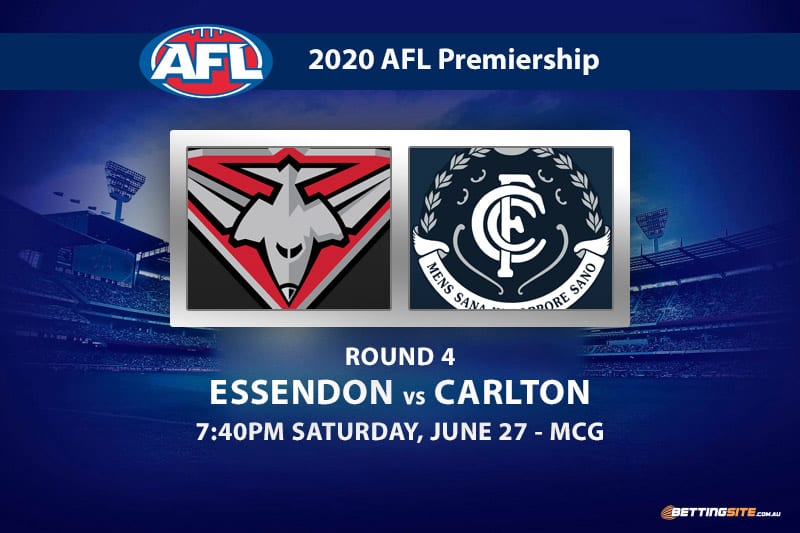 Bitter rivals Essendon and Carlton will go head-to-head at the MCG this Saturday night in a mouth-watering contest between two sides looking to climb the AFL ladder in 2020.

The Bombers dominated the headlines this week after Conor McKenna tested positive to COVID-19, which saw their scheduled clash with Melbourne postponed and wrecked many a multi.

Now the news has come out that McKenna has since tested negative to the coronavirus, but the Irishman will still need to sit in quarantine for 14 days.

The bizarre events have left everyone scratching their heads as to what is actually happening, but the blockbuster bout will go ahead this weekend as planned.

Carlton won in dramatic fashion against Geelong last week, with a memorable last-minute effort from Eddie Betts sealing the deal for the Blues.

It will be interesting to see if David Teague’s emerging side can back it up against an Essendon outfit that has had an extra week’s break.

Run and carry through the midfield is the go-to strategy for the Bombers, and they do this through Andrew McGrath and Dylan Shiel. Expect Shiel to cop a hard tag from Ed Curnow this week, meaning McGrath may have to take on a bigger load. The young star is a known ball-winner that will be hard to stop this Saturday.

Marc Pittonet has make a big impact in his first few games for the Blues. The former Hawk’s impressive ruck work has been of huge benefit to Patrick Cripps, who is getting first use out of stoppages more often than not. Essendon has no dominant ruckman to match Pittonet and no big-bodied midfielders to stop Cripps, which is why we are picking him to get 30 touches.

One thing we know for sure is that Jake Stringer is not messing around anymore. The premiership-winning forward had his way against the Swans in round two and kicked three goals on quality opposition. Given the Blues back line doesn’t have a perfect match up for Stringer, we can see him kicking a few at the MCG this weekend.

Levi Casboult provides a strong presence in the air, but Jack Silvagni is not to be underestimated. Back in round one, Silvagni drew multiple free kicks from Richmond defence and finished the game with two goals. We really like the odds for the father-son pick to slot a major at some stage on Saturday night.

We took the Blues to go overs in total match points last week and they delivered, so we will be backing them and Essendon in again this Saturday. Both of these sides love to counter from half-back and try to take the shortest path to goal, leading us to believe a high-scoring match is on the cards.

It is hard to assess where the Bombers sit in 2020 because we did not get to see them take on the Demons, but it was clear last week that the Blues are going to ruffle some feathers this season. Beating Geelong at Kardinia Park is no fluke and we believe Carlton will get another win this weekend.