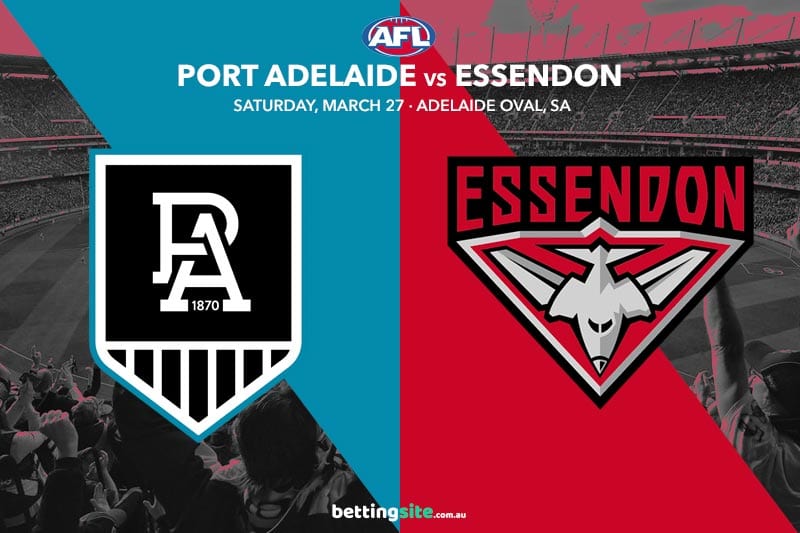 Thousands of local fans will head to Adelaide Oval this Saturday afternoon to watch Port Adelaide take on Essendon in the Power’s first home game of the 2021 AFL season.

Orazio Fantasia will face his old teammates for the first time since requesting a trade to the Port Adelaide Power last year, and the Bombers might well apply some extra physicality when the forward goes near the footy.

Even though the Dons blew a massive 39-point lead to the Hawks, their 10-goal first half displayed plenty of promise.

Currently sitting atop the AFL ladder after a big win over North Melbourne in round one, the Power are red-hot favourites to start the season 2-0.

The midfield battle may be one of the only close contests in this match, as Port should overpower the Bombers inside the arcs with their experienced lineup. Travis Boak and Zach Merrett are the key centremen for each side, and they both got their seasons off to a flyer in round one. Merrett has played well against the Power in the past, and the Bombers will need another strong performance from their star midfielder if they are to have any chance of keeping this one close.

It only took one good quarter for the Power to create an insurmountable lead over the Kangaroos as they cruised to a big victory in round one. Ollie Wines was the main disposal-getter, but the Port midfield shared the load in that regard. All the forwards had an impact, with five of them kicking multiple goals. We would not be surprised if the Power posted another big score against the less experienced Dons.

When they were switched on in the first half against the Hawks, the Essendon Bombers looked fantastic with the football and converted their chances well, but they fell apart quickly once some pressure was applied. Four midfielders hit the scoreboard last week, while their young forwards Harrison Jones and Nik Cox were quiet. They could struggle to kick a winning score this week against Port’s tight back six.

In what we expect to be a one-sided affair, the Power forwards should share the load well again, giving Zak Butters a chance to kick another pair of goals. The inclusion of Orazio Fantasia has been fantastic for Port, and since the Bombers might have to play their best small defender on Orazio after he kicked four goals in round one, Butters could go under the radar and still kick his two majors.

Zach Merrett to get 30+ disposals

With Andrew McGrath and Dylan Shiel beside him in the midfield, Zach Merrett does not need to carry the Bombers, but he will still be their best kick out of the middle. Merrett should use his good endurance and footy IQ to tally up handball receives and rack up 30 disposals against the Power, which he did in back in their 2019 clash.

The home crowd will be in full force for this contest, and they should be in for a good night. Whereas Essendon capitulated in round one, Port took the foot off the gas against North Melbourne and still won by 52 points. Take the big margin on the Power along with Butters for a couple goals and Merrett to have 30 or more touches.