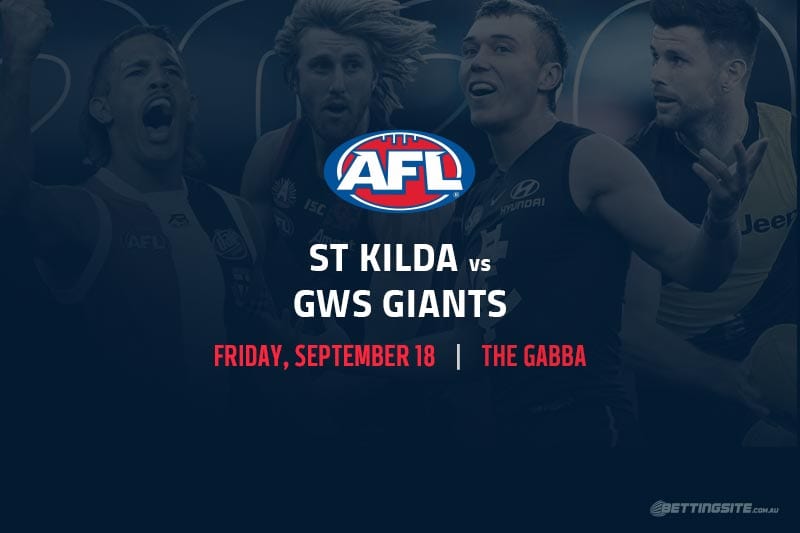 The AFL finals start now for the St Kilda Saints and GWS Giants.

Brett Ratten’s Saints are in a favourable position sitting seventh on the ladder with a percentage of 111.4, as they can still finish inside the top eight even if they lose.

That is not the case for the Giants, who will miss the finals if they don’t win at the Gabba on Friday night.

There were no reported injuries for either side in round 17, but an array of changes could be made at the selection table.

GWS might consider bringing back Jake Riccardi to bolster the forward line, while St Kilda may drop the quiet Dean Kent.

The Saints are coming off a much-needed seven-day break, while the Giants will play off only a five-day turnaround.

Seb Ross has been a prolific ball-winner in each of St Kilda’s the last five matches against Greater Western Sydney, collecting 29, 31, 31, 30 and 26 disposals. Even though Ross is playing the shutdown role more often in 2020, he is still finding a decent amount of footy.

Now 32-years-old and playing at his third club, Paddy Ryder is thriving in the St Kilda system. Switching with Rowan Marshall between the ruck and the forward line, Ryder has kicked a goal in each of his last three matches and will extend that streak by exposing Shane Mumford’s lack of mobility.

The uncertainty that surrounds the GWS Giants has led us to tip the Saints. Leon Cameron elected to make eight changes for last week’s clash with Melbourne, which they eventually lost. With a handful of players knocking on the door, GWS will make more changes for this game. The Saints look far more settle in comparison, and their relative consistency will prevail here.