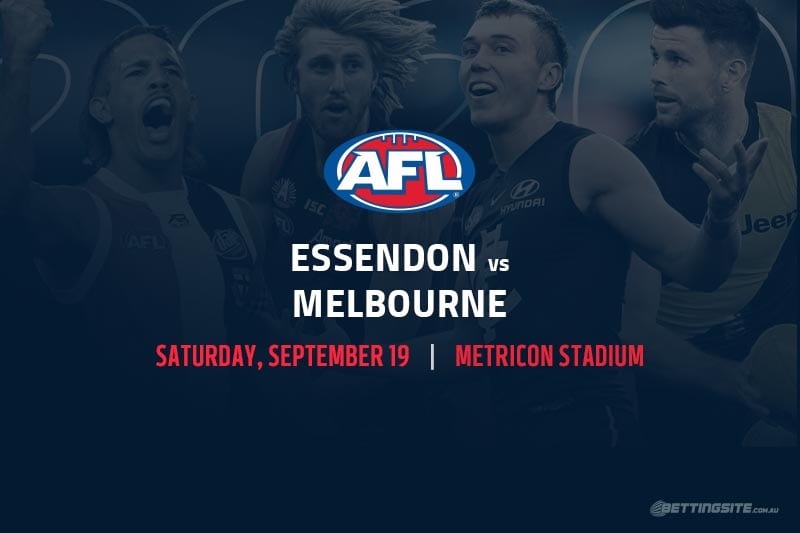 There will be plenty of eyes upon Metricon Stadium this Saturday afternoon when the out-of-sorts Essendon Bombers take on a Melbourne side who are somehow still in finals calculations despite an up-and-down season.

Essendon fans cannot wait for this 2020 campaign to come to an end, as the Bombers have only won two of their past 10 matches. They managed just four goals in an entire match against Port Adelaide, and that 50-point defeat sent the club’s percentage below 80 – usually the mark of a bottom-four side.

The Melbourne Demons, on the other hand, are coming off an impressive victory against the Giants that puts them well and truly in the finals hunt for the last round. If the Dees can bring the four-quarter performance they showed last week, they should prove too good for this Bombers outfit.

For a majority of the game last week against the Giants, Melbourne looked like they had an answer for everything GWS threw at them. With their season on the line, the Dees need a percentage-boosting win to have a chance of playing in the finals series. The Essendon back line looks to be one of experimentation after rookie defender Brandon Zerk-Thatcher and career forward James Stewart were given the key posts against Port. If Melbourne are a serious team, they should put away the Bombers.

Bayley Fritsch is yet to set the world on fire but has threatened to do so with consistent performances week in, week out. The high half-forward has been threatening to hit the scoreboard in recent weeks, and against this Essendon defence he should get the chance to kick his first bag of the season. He averages just over a goal a game, but these odds are too good to pass up.

Steven May has bounced back from a forgettable first year at the Demons with a season worthy of an All-Australian nod. The former Gold Coast Sun had 19 disposals and was one of the most influential players in Melbourne’s win over the Giants last week. He averages a touch under 16 disposals per game this year, but his numbers are up in recent weeks and Essendon’s forward setup is a mess.