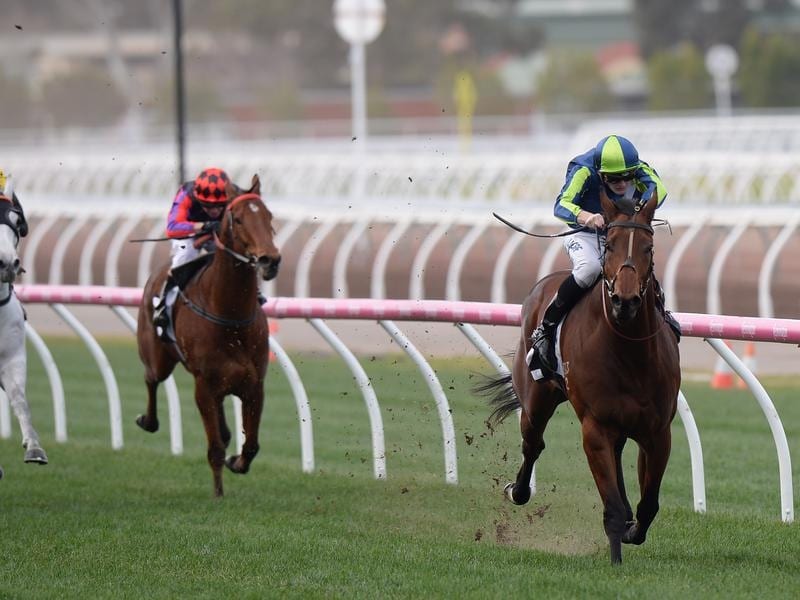 Talented gelding Sovereign Nation’s liking for 1400 metres on big tracks gives him the chance to break a frustrating run of outs at Eagle Farm.

Sovereign Nation is topweight in Saturday’s Ariat Country Music Open Handicap and will be chasing his first Queensland win.

Formerly trained by Lindsay Park in Victoria, Sovereign Nation has at various times been labelled a future Group One star and even a possible top sire before he was gelded.

Sovereign Nation won the Group Two Stutt Stakes and was fourth in the Group One Caulfield Guineas as a three-year-old.

His best form was at 1400m on the big Flemington track where he won three times with his most recent victory coming in a Listed race at the track in March last year.

When original trainers. David and Ben Hayes and Tom Dabernig, decided he needed a change of scenery, Sovereign Nation was sent to Matt Dunn at Murwillumbah.

Sovereign Nation has again shown his liking for 1400m on big tracks since going to Dunn.

His best run in the north was a second to Balboa Rocks in the Listed Sunshine Coast Cup (1400m) in January.

Sovereign Nation’s two most recent runs have been at Eagle Farm over 1400m and both have been good efforts.

He made ground when fourth to Manaya two runs back and then looked unlucky when third at his most recent run.

He was making a winning run along the fence when he was stopped in his tracks behind another runner.

Dunn said it was a fair comment to say Sovereign Nation should have won his last start.

“It is the way things are going for him. But he likes big tracks and this isn’t the toughest of open company races,” Dunn said.

Apprentice Baylee Nothdurft will again 2kg on Sovereign Nation who will carry 57.5kg.

“He isn”t all that badly handicapped but most of them are on the limit,” Dunn said.

Dunn has sent injury-plagued sprinter Care To Think for a spell after he again failed at the Gold Coast last Saturday.

Dunn hopes to get him back for a preparation next year, otherwise he will be retired.