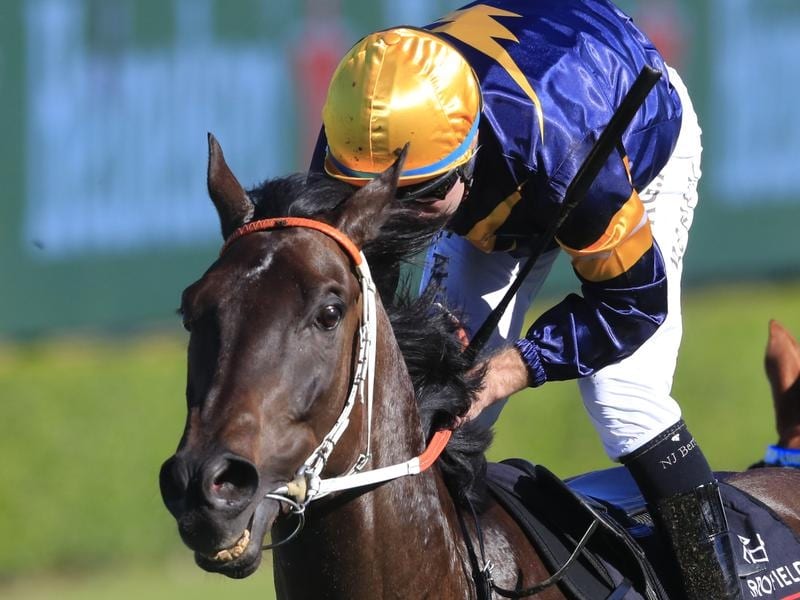 Import Mount Popa has stamped himself as a stayer of the future with an exciting win at Randwick.

They share the same sire and hail from the same stable and that might not be where the similarities between Caulfield Cup favourite Master Of Wine and Randwick winner Mount Popa end.

The latter made a dynamic Sydney debut on Saturday, coming with a sweeping run from back in the field to coast to a 2-1/2 length win in the Castelvecchio At Arrowfield Hcp (2000m) at Randwick.

Jockey Tommy Berry, also the regular rider of exciting stayer Master Of Wine, says there are parallels between the two.

“I hope he is as good as Master Of Wine. He is the same sort of horse, he is still very immature,” Berry said.

“He has the same sort of make-up and he gives you that bit of excitement when you win on him.

“A bit like Master Of Wine, I think he is another preparation away. He is far away from being at his best at this point.”

Starting his career in France, Mount Popa appealed to the Hawkes team because he was by Master Of Wine’s sire Maxios and shaped as an ideal type for Australian conditions.

As they did with the Group Three winner, the stable won’t rush Mount Popa and will instead let the five-year-old go through his grades before giving him a chance in better races.

He is likely to be spelled after his Randwick victory and could be given an educational spring with a view to bigger things next year.

“Once he actually balanced up he really started to lengthen stride and that’s what we wanted to see,” co-trainer Michael Hawkes said.

“I think he’s a really nice horse of the future.

“These sort of imports you’ve got to build up and get the score on the board.”

After missing the start at his Australian debut in Melbourne and finishing an eye-catching fourth, Mount Popa was expected to produce in Sydney.