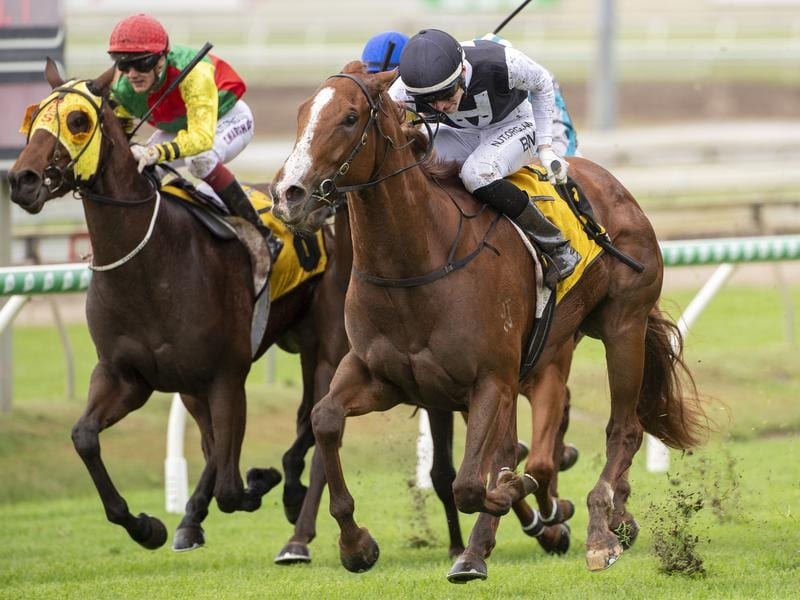 The Actuary has appreciated the removal of blinkers to claim the Listed Phoenix at Doomben.

Trainer Tony Gollan admitted the best thing he had done for a while was to take blinkers off the race day gear of The Actuary who won her first stakes race at Doomben.

It gave Gollan 101-1/2 winners for the metropolitan season after he had earlier become the first to reach a century in Queensland when Howwonderfullifeis won.

Gollan paid tribute to his owners and staff who he said had down a wonderful job.

“There is still a month and a bit to go in the season so it will be interesting to see where we end up,” he said.

One of his main supporters has been his childhood friend Brian Siemsen who now runs Black Soil Thoroughbreds.

Siemsen heads the syndicate which races The Actuary who was a $450,000 buy at the Magic Millions yearling sakes.

“I think he spent about $1.5 million at the sales last year so he deserves every success,” Gollan said.

“I joke he was born under a rainbow but we have had a good run with other horses such as Niedorp lately.”

Gollan and Siemsen played rugby league together and both had stints at South Sydney 20 years ago.

“I always felt The Actuary could win a stakes race. I think I made a mistake racing her in blinkers and she has improved lengths since we took them off,” Gollan said.

“She would have an even better record if I had removed them earlier and it was the smartest thing I have done for a while.”

Gollan said he wasn’t sure if The Actuary would progress to the spring carnivals in the south.

“I know The Phoenix has produced a lot of future black-type winners in the spring but I am not sure this year’s race will prove that strong,” he said.

Winning jockey Baylee Nothdurft said The Actuary had the makings of a good filly.

“She finished too well and I think she will be better with time,” he said.