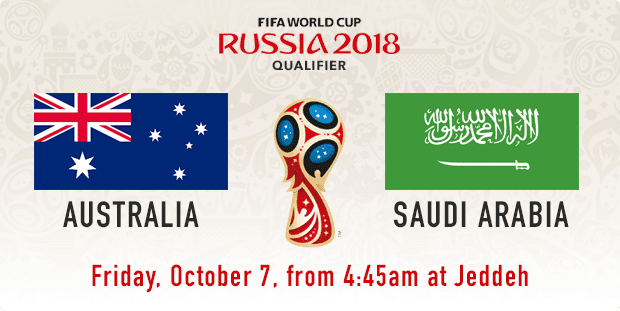 Last time they met:
Saudi Arabia defeated by Australia 2-3 on the 8th of September 2014 at Craven Cottage, England

THE top-two sides of group B in Asian contingent of World Cup qualifiers will meet in the Middle East to determine who will stand alone at the top of the pile.

The Saudis have been white-hot this campaign and boast an unblemished record after accounting for Thailand and the Iraq.

The Green Falcons left it to the last minute to secure their wins, scoring beyond the 80th minute to sink both Thailand and Iraq.

The Saudis are coached by former Dutch main man Bert van Marwijk, and have shown a great ability to adapt, hold their shape and keep their discipline throughout his tenure.

The Aussies will prove the toughest challenge Saudi Arabia has encountered thus far.

The Socceroos have been magnificent in their two games to date, sweeping aside Iraq before overcoming a difficult opponent in the UAE in 35+ degree heat.

The Aussies will have a multitude of attacking options and will potentially be able to start Tim Cahill after the former Everton and now Melbourne City striker’s return to full training.

Tim Cahill scored the solitary goal in Australia’s last outing against the UAE and is the $6.50 favourite at Sportsbet.com.au to find the back of the net first on Friday morning.

Another man to look out for is Manchester City loanee Aaron Mooy, who is plying his trade at England second division side Huddersfield.

The English side was not expected to be a factor in this year’s campaign, but since Mooy has joined they have won eight and drew once from their opening 11 games, and much of the success is attributed directly to Mooy’s wizardry over the ball.

Aaron Mooy is $4.50 to score at anytime during the 90 minutes on Friday morning at Sportsbet.com.au.

Aussie front man Matthew Leckie said the visitors will be looking to take the full three points from their trip to the west of Asia, but baulked at suggestions the team needs to tighten up defensively heading into Friday.

“People in the media have their own opinions — that’s normal, it’s their job. There was a few saying maybe the best option would be to change the game plan, drop back and try and score on the counter.” Leckie said.

“But the boss doesn’t want to change anything of what we do.

“He wants us to always move the ball, be dominant in the game. It’s going to always be tough for a team to defend for 90 minutes.”

“We’re just expecting a really hard grind with a really strong team with motivation to not concede.”

The Australians have dominated the Saudis in their six previous meetings.

The Socceroos have lost just once to the Green Falcons and have a three game winning streak that stretches all the way back to 1997.

The Saudis have been sensational thus far, but their sternest test comes up here as Thailand and Iraq have both proven to be easy-beats to date.

The Socceroos are yet to concede a goal in these qualifiers and have won both at home and away.

Australia is at the $2.50 quote at Sportsbet.com.au to keep a third straight clean sheet on Friday morning.

The Australians also boast a healthy record against their counterparts.A win on Friday morning would stretch the Socceroos winning streak over Saudi Arabia to four straight matches.

After Sportsbet.com.au opened a generous price for the Green and Gold, the money has flooded in.

After being at $2.60 on Monday afternoon the Aussies have been crunched in to $2.10, and we expect those odds to tighten even further as kick off draws closer.

The Socceroos proved last time out against the UAE that oppressive conditions in a hostile environment against quality opposition does not hold any fear for them, and we are expecting the Aussies to surge to the top of Group B on Friday morning.