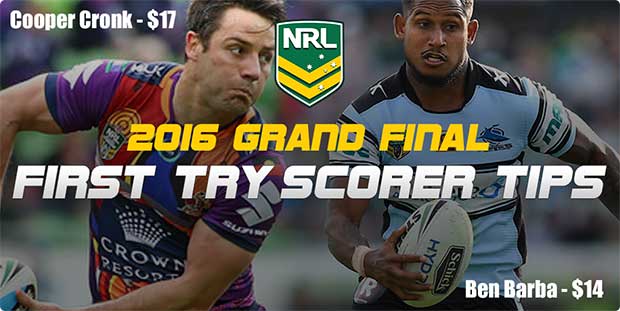 THE stage is set for the biggest night on the NRL calendar, with the Melbourne Storm making the trek to Sydney to take on the Cronulla Sharks for what is expected to be an epic grand final on Sunday night at ANZ Stadium.

The Storm are the favourites to win with online bookmakers, coming into the decider as the minor premiers and on the back of three successive victories. Their latest win was over Canberra Raiders in last Saturday’s Preliminary final, recording a clinical 14-12 success, and they have subsequently installed at $1.85 with Sportsbet.

However, they face a tough task against the Cronulla Sharks ($2) who will be playing with plenty of passion as they look to score their club’s first Premiership win since joining the league back in 1967.

One man who wants the win badly is Ben Barba. The 27-year-old would be forgiven for experiencing a sense of déjà vu heading into Sunday’s decider, with the five-eighth having taken on the Storm in the 2012 Grand Final when playing for the Canterbury-Bankstown Bulldogs.

That match didn’t end as well as the Doggies had hoped, going down 14-4 at the hands of the purple wall after coming into the final as minor premiers.

That loss four years ago still hits a nerve for Barba and he is determined to turn the tables on Melbourne in 2016.

“Something I learnt from last time was just to be relaxed and not get too ahead of myself,” he said.

“These first few days are a little bit easier too but when all your family starts arriving and you get closer to the game you start to feel it a bit more.

“It’s a wonderful week when we start doing the breakfasts and the shows, you’ve got to embrace all that stuff because you don’t know when your next one’s going to be.

“It’s about how you handle it, and I think we’ve got some good leaders here at the club who keep everyone in check.

“I’m sure we’ll have some fun while we’re doing it.”

Cronulla aren’t without a chance in the grand final, with a quality team including young guns Jack Bird and Valentine Holmes. Neither of the backline stars have played in a Premiership decider, but both are regarded as two of the most exciting prospects in the NRL.

Both Barba and Holmes are expected to make a big impact for the Sharks on Sunday, rated $14 and $9.50 respectively in Sportsbet’s first try-scorer market.

Holmes has had a stellar year, scoring 19 tries throughout the season – a feat which has seen him equal the club record which was established back in 1999 by David Peachy.

Bookies are tipping the 21-year-old sensation will be out to smash that record on the sport’s highest stage on the weekend, also installing him as a $2.10 chance to score at any point throughout the match.

However, to do that, Holmes will have to mentally block out his dismal performance against the Storm back in round four, a night which left a rare blemish on his season.

Holmes said he is determined not to repeat that performance this weekend when he laces up his boots for the biggest test throughout his short career.

“I dropped a few balls that night. I guess I wasn’t concentrating on what we were doing. There was some off-field stuff happening,” said Holmes.

“Everyone has an off game. I fixed it, I have turned that around this season. You have to be mentally switched on game day and be ready for anything.

“I have been happy with how I have been going this year…I am equal with Peachey, so that is some plus and a good thing.

“[The Storm] are a well-structured team. They have a few great players there. Their forwards and obviously Cronk and Smith,” Holmes said.

“They’re a tough team and we love going up against them. They are grinding team like us. It will probably come down to the 80th minute.”

Despite the pressure heading into a grand final in just his third year in the NRL, Holmes said he is soaking up every aspect of grand final week.

“I can’t wait, I’m just soaking up this week, I’m enjoying it with the boys and staff and just waiting for the day to come,” Holmes said.

A pretty wide-open market for the first try scorer on Sunday, but to be honest it is hard to go past Suliasi Vunivalu. He has had an enormous debut year in the NRL and he scored the first try in the Storm’s Qualifying final clash with the North Queensland Cowboys two weeks ago.

There is no doubt that this game will be a harder task, but he has barely put a foot wrong since stepping out at the highest level and there is no reason why he can’t continue to excel on Sunday in the most important game of the year.

For those Sharkies fans thinking their team might break through first, we would be putting our money on Valentine Holmes.