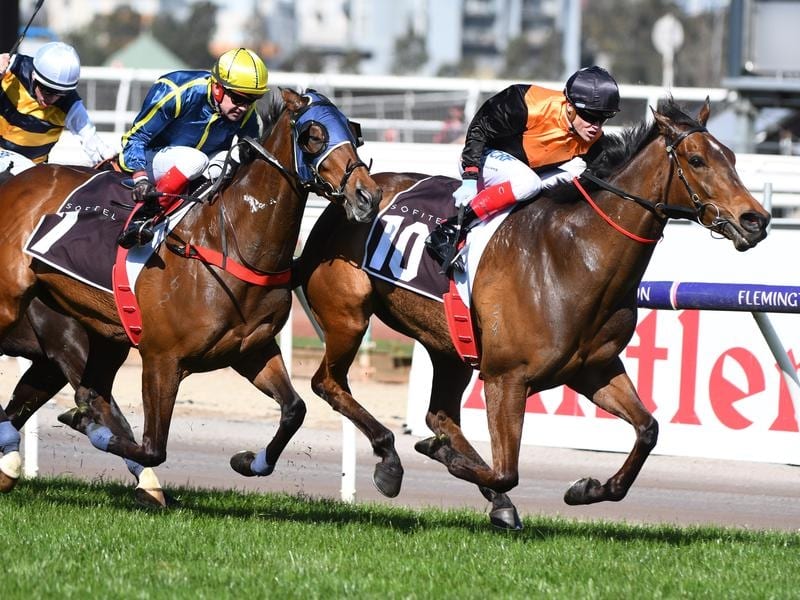 Rox The Castle has taken a significant step in his career with a hard-fought win at Flemington.

Lightly raced gelding Rox The Castle has taken the step to stakes company and continued to build on his promising record with a determined victory in a Listed race at Flemington.

Five-year-old Rox The Castle took his record to seven wins from 12 starts when he held off Travimyfriend to win Saturday’s Listed Sofitel (1400m) by a long neck with Romancer a length away third.

Rox The Castle is one of less than a handful of horses Kerry Edwards has in work and the gelding gave the trainer her first stakes race victory.

“I’ve had stakes placings before but not wins,” Edwards said.

“He’s fantastic this horse. I love him.”

Edwards was full of praise for Rox The Castle’s toughness after crossing from a wide barrier under Craig Williams to sit outside the lead before fighting hard when it counted at the business end of the race.

“He is unbelievable,” Edwards said.

“That was tough, what he did then. Craig sat on him as long as he could. It was a little bit close at the end but he just digs in so deep.

Edwards said she has three horses in work and another at the horse breakers.

“I’m just a small stable and I do it all myself so I really can’t handle more than four at work at any one time,” she said.

“I have the passion for the horse and getting a horse like him is absolutely outstanding.”

The race was marred, with seven-year-old gelding Antah suffering a serious injury in the final 100m of the race and the gelding was euthanised.