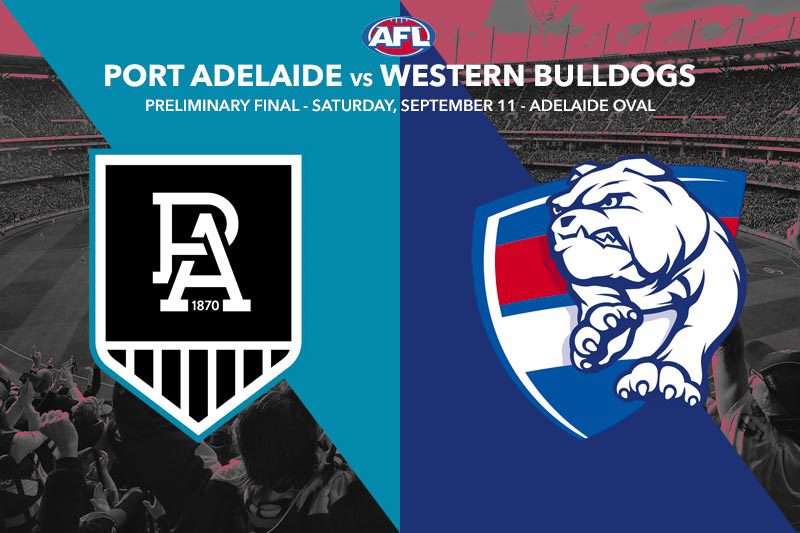 The Port Adelaide Power will host the Western Bulldogs this Saturday night at the Adelaide Oval in the penultimate week of the 2021 AFL Finals Series.

Both sides have big injury concerns heading into this contest; the Bulldogs are hopeful Marcus Bontempelli can play after tweaking his knee last week, while young Port Adelaide forward Mitch Georgiades (hamstring) has been ruled out.

Cody Weightman was subbed out with concussion in the Bulldog’s one-point triumph against the Lions last weekend, meaning the exciting small forward will be replaced by Jason Johannisen.

The Power did not play last weekend after winning their qualifying final against Geelong, which has given Orazio Fantasia enough time to rest his sore knee before this critical contest.

Ken Hinkley’s men beat the Bulldogs by two points in round 23, and we expect another thriller this weekend as these clubs fight for a spot in the 2021 AFL Grand Final.

The Power and Bulldogs have already faced off twice this season, with both clubs winning one game apiece. The Doggies got the job done in round nine off the back of Aaron Naughton’s four goals and Jack Macrae’s 32 disposals, while a masterclass from Travis Boak and Ollie Wines carried the Power to victory in round 23. The biggest difference between the two contests was the scoring, as both teams prioritised defence in the latter encounter.

Luke Beveridge has played his captain inside 50 to great effect this season, but Marcus Bontempelli may spend even more time up the ground if he is not 100 percent fit. Adam Treloar and Bailey Smith should spend more time in the middle if that is the case, meaning the two midfielders could offer some value in the major disposal betting markets.

Key matchup: Robbie Gray vs Taylor Duryea
Robbie Gray has been a match-winner his entire career, which automatically makes him one of the most dangerous players on the field in the big games. Gray had 25 disposals and two goals against the Western Bulldogs in round 23, and Taylor Duryea cannot allow him the space to do something similar this week. Duryea was pivotal in the Bulldogs’ semi-final win against the Lions, keeping a red-hot Charlie Cameron to just one disposal in the fourth quarter. Will Gray get a hold of Duryea again, or will the former premiership Hawk shut down the Power veteran?

The week of rest and home-field advantage make the Power the team to beat. Even though the Bulldogs beat them at the Adelaide Oval earlier in the season, we think the Power will get the job done this time around with their in-form midfield. We do not think a sore Marcus Bontempelli can get the Bulldogs a win without the forward duo of Josh Bruce and Cody Weightman alongside him.

Bailey Smith to get 25+ disposals

Bailey Smith has collected 25 or more disposals in 14 of his 24 matches this season, including both contests against Port Adelaide. Smith was electric in the semi-final last week as he racked up 27 disposals and kicked three goals. The young Bulldog is already an elite player in just his third season at the Kennel, and we expect him to put together another excellent performance this weekend.

Robbie Gray will once again star inside 50 against the Dogs as the Power advance to their first AFL Grand Final since 2007. Bailey Smith will thrive in midfield, but it will not be enough to win the match for the Bulldogs.