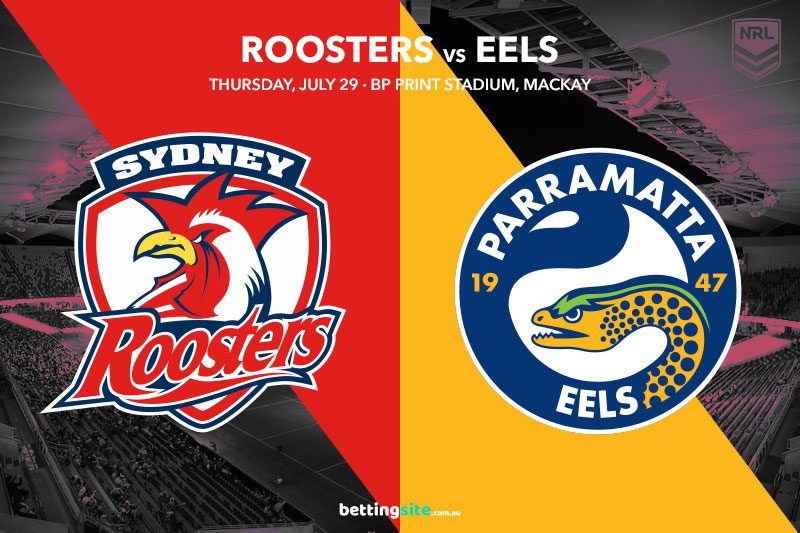 The Sydney Roosters will take on the Parramatta Eels at BB Print Stadium in Mackay to kick off Round 20 of the 2021 NRL Premiership.

The Roosters have a golden opportunity to get into the race for a top-four berth, as a win would draw them level on competition points with Parramatta.

The Eels are the $1.55 favourite but are coming off a frustrating loss against the Raiders where they almost stole it at the death.

The Roosters had been patchy before their dominant six-tries-to-one win over the Knights on the Sunshine Coast, and it was that result coupled with the Eels loss that has opened up this position battle on the ladder.

Mitchell Moses is likely to miss the game as he continues to recover from breaking a bone in his spinal cord, while the Roosters will be without Billy Smith for the rest of the season and Matt Ikuvalu for the run into the finals.

Sio Siua Taukeaiho is expected to return for the match, which does provide the Roosters a nice boost to a forward pack that has been sensational in recent weeks despite being undermanned.

They may be the $2.45 outsider for this game, but it is hard to ignore the $3.75 on offer for the Sydney Roosters by the 1-12 margin. Parramatta without Mitchell Moses last week lacked their usual zest in attack, and the Roosters have shown all year that they are more than capable of winning no matter who plays. Sydney’s record over the last 18 months against top-four sides has left a little to be desired, but the absence of Moses gives the underdogs a red-hot chance.

The Roosters will be forced into a reshuffle with the injuries to Matt Ikuvalu and Billy Smith, and we reckon it heightens the chances that both James Tedesco and Daniel Tupou both cross the line. The two elder statesmen of the back line are a fair chance of scoring most weeks, but they should lift a gear. Angus Crichton is always terrific value if you’re after a tryscoring forward, while Sitili Tupouniua should also be thrown in any NRL betting slips this week.

The Eels’ run into the finals is hard enough, and the last thing they needed was to have their halfback missing for some of these games. It makes their task even harder, and they showed against the Raiders they were unable to create points with the same ease as they usually do with Moses out. On top of this, there will be the usual smattering of doubt starting to creep in around another promising Eels campaign ending in them limping to the finish line.

Maika Sivo almost scored the game-winning try last week, but he will get across for at least one this time to make up for failing to finish off that chance. Will Penisini made his debut at right centre last week and showed he has plenty of talent, making him a good one to back while he is still a relative unknown.

The form of Jared Waerea-Hargreaves in recent weeks has been something to behold, as the seasoned veteran has taken it upon himself to do the hard work for a Roosters team who have lost three players to retirement and been without several more for different stages of the season. To get the better of Junior Paulo, he is going to have to be prepared to run through a brick wall for his beloved Roosters, and that battle in the middle shapes up as a slugfest. The two biggest dogs in the yard ripping in – footy doesn’t get much better than that.

This game looks like a good one to get on the underdog Roosters. The 1-12 margin is too hard to pass up for a $3.75 return. Mitchell Moses is just too big of an out for the Parramatta Eels, who didn’t get going against Canberra until the game was almost beyond their reach. If they start slow again, Sydney will ensure there is never a chance for a late comeback.

Roosters +4.5 with Maika Sivo, Daniel Tupou and Angus Crichton to all score a try will get you a $15.50 return.