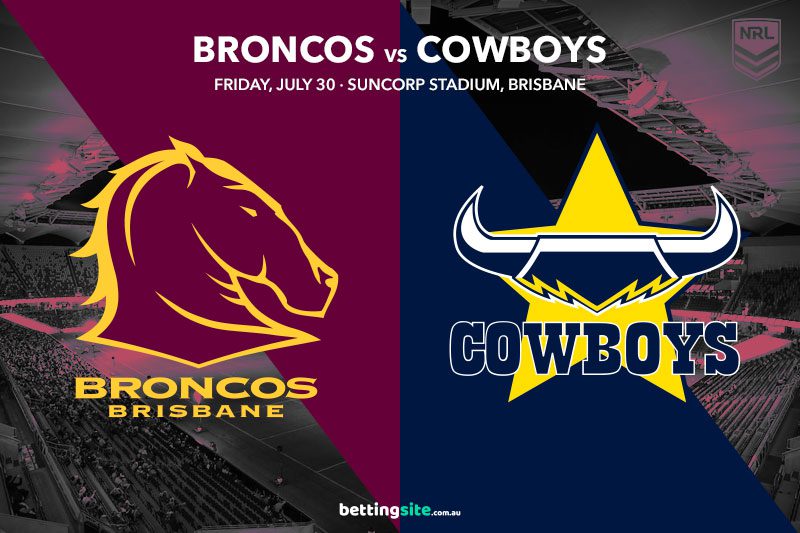 Both the Brisbane Broncos and the North Queensland Cowboys may currently sit outside the top eight in the NRL, but that won’t take away from what promises to be an exciting match on Friday night at Suncorp Stadium.

Their clash back in Round 9 was one of the games of the year, with only a Valentine Holmes field goal the difference, and NRL bookies have the Broncos as only a slight favourite for the rematch.

Injuries to Holmes and Hamiso Tabuai-Fidow have forced Jake Granville to start at fullback for the Cowboys, which is a throwback to his days at Wynnum Manly almost a decade ago, while Kane Bradley will remain on the wing after a solid showing on debut against the Storm.

The Broncos have recalled Danny Levi onto the interchange bench, while Keenan Palasia will start at prop to replace the suspended Thomas Flegler.

Both teams had narrow losses in Round 19 where they lacked a killer blow when the game was demanding it, so it will be interesting to see who comes out on top if the game is as close as it should be.

Brisbane have shown they can be super competitive for long stretches of games, and they’ll feel as though they threw it away against Penrith in the second half last week. When the game was crying out for some leadership in the dying minutes, it was lacking severely and cost them a result.

Kotoni Staggs got nowhere near enough touches towards the end of that game and so will no doubt go looking for the ball early this week, which makes him an attractive first tryscorer bet at $11. He will probably be the most backed in a same-game multi to score anytime at $1.72.

Jordan Riki at $4.20 to cross the stripe is a bet worth getting on also, as the big unit has shown the ability to run a nice unders line between defending halves. The -2.0 line is a good one to get on just to boost the value slightly.

For a team who have lost six in a row, North Queensland’s effort against the Storm last week was impressive. The upset looked like it was on for a moment or two, but some mistakes toward the back end of the game cost them. Their two losses against the Roosters this year were similar, so can they overcome some second-half concentration issues to end their losing streak?

Kyle Feldt scored his 100th NRL try last week, and you’ll see almost every Cowboys fan back him at the $1.53 price to score at any stage on Friday night, while the real believers will take on the $8.50 for him to score the first of the game. Murray Taulagi will be at left centre for this game and is $18 to score the first try, making him the best value pick in the back line for the Cowboys.

Scott Drinkwater is $3.60 to cross the stripe, and his running game is going to create a few chances on the left edge. Whether he can finish one off backing up on the inside remains to be seen, but that side of the field is the one they favour and those odds are pretty good.

Brodie Croft has been rightly maligned during his stint at the Broncos, but he gets another chance this week against his former teammate Tom Dearden. Croft is a weakness in the defensive line, and it will be interesting to see how Dearden combines with Mitch Dunn and Connelly Lemuelu to try and take advantage of that. Remarkably, Dearden is on a 20-game losing streak as a starting halfback in the NRL, so while this matchup lacks the firepower others do in Round 20, the mental battle between two young players looking to overcome some demons will be fascinating.

The way the North Queensland Cowboys played against the Storm last week makes them a sensational pick at the 1-12 margin this week. They may have lost seven of their last nine against Brisbane at Suncorp Stadium, but a lot of those losses are against Wayne Bennett’s Broncos and not this version. They have the best half on the field as well as the best dummy half, and that will get them across the line in a close game.

Cowboys 1-12 with Murray Taulagi and Kotoni Staggs to both score a try at any time pays a tidy $15.75 at Sportsbet.