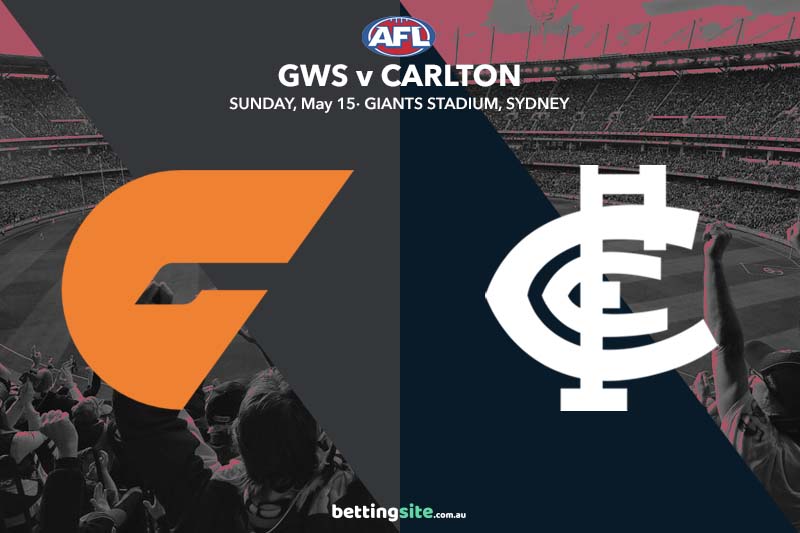 GWS v Carlton has got danger game written all over it for punters, with the shock resignation of Giants coach looming large over Sunday’s contest at Giants Stadium.

Will the Giants produce their best to send Cameron off a winner, or will the repeat their scoring woes from round eight when they kicked a dismal 4.11.35?

The Giants are surprisingly a $1.78 favourite with Australian online bookmakers to beat Carlton ($2.10 with Unibet Australia). The line has been set at 3.5, which is unlikely to find many friends.

The Giants have historically dominated the Blues having won their last five encounters. However this game will be awash with emotion, which is impossible to quantify and can supersede form and history. We have seen AFL teams play out of their skins numerous times after a coach quits or is fired.

Carlton was ruthless in its round eight demolition of Adelaide and now sit comfortably in the top four. The Blues 2022 form in Melbourne is excellent, but they have been beaten by the Suns and Freo away from home so issues on the road remain. This deficiency will need to be corrected if the Blues are to hold their ladder position as the season rolls on. They are playing with plenty of confidence and if they have a good opening quarter, they should go on with the job.

Carlton Blues forward Charlie Curnow is in career best form and took the round eight game by the scruff of the neck booting six goals. We all love to see the big men crash packs, grab huge marks, and kick truly between the sticks and Curnow is has those skills. We will match Curnow up with young Giants defender Sam Taylor who is improving this season, averages over 15 possessions per game, and chases hard. If Curnow gets off the leash, he could carry his team home in what promises to be a low scoring affair. We can expect a rotation of defenders to try and quell his influence, but Taylor is almost identical height and weight and he and Curnow should stand shoulder to shoulder for long portions of the game.

The betting markets have swung behind GWS here, presumably based on Carlton’s inability to win away. The line has been set at a very skinny 3.5 points, so the Giants are expected to scrape home in a cliff-hanger. The Cameron factor is a strong disincentive to bet in this game because its potential impact cannot be plotted on a spreadsheet. We are going to close our eyes and just back the Blues here to spoil the send-off fairy-tale, but without huge confidence. There is no reason to play around with points, so Carlton straight up is the tip, currently paying $2.10 on Neds Australia.

For those looking to squeeze some value out of this unusual game we have constructed an ambitious four-legged Blues dominated multi. We will take Carlton straight up, into Charlie Curnow 2+ goals, into Patrick Cripps 25+ possessions, into Jack Silvagni anytime goal kicker. This combo will return $3.52 courtesy of Ladbrokes.