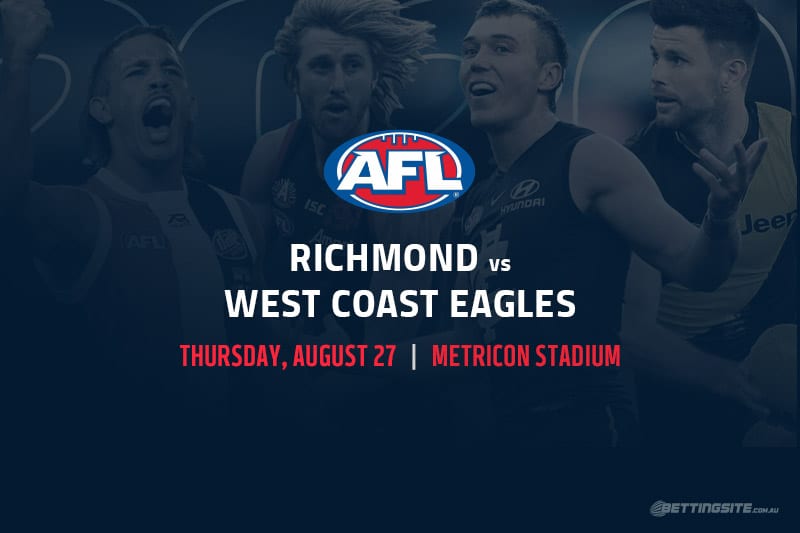 Metricon Stadium plays host to two genuine AFL Premiership contenders on Thursday night as Richmond takes on West Coast. The Eagles leave Western Australia for the first time since round six as they look to extend their winning streak to nine games. Although the Tigers slipped up against Port Adelaide three weeks ago, the reigning premiers are still seen as the benchmark of the competition. These sides could easily be paying $1.90 each with AFL bookmakers for what is set to be one of the best matches of the season.

Coin-flip odds for a team that has won eight games in a row is quite the value. The Eagles are coming off a four-day break and have to fly from Perth to the Gold Coast, but this is the team to beat this year. When they were challenged late in the game against the Giants, the likes of Nic Naitanui in the ruck and Jeremy McGovern down back had all the answers. This West Coast side matches up perfectly against Richmond and should win this.

Shai Bolton has flourished since stepping into Richmond’s classy midfield a few weeks ago. He is averaging 18 touches a game over the last month and starred on Saturday night against Essendon, winning the Yiooken Award with 29 disposals, seven inside 50s and five clearances. Much like his team, Bolton’s form is headed in the right direction.

Dom Sheed was among West Coast’s best against the Giants on Sunday with his two-way running, but he struggled to make much impact inside 50. He is the man for big occasions for the Eagles, so look for him to make his way into the forward line at some stage on Thursday night and get on the scoreboard.

Second only to Tom Hawkins in the Coleman Medal betting, Josh Kennedy is averaging four goals a game in the past month and could prove a handful for the Richmond back line. Kennedy has struggled against the Tigers in the past, but the veteran is in red hot form and doesn’t have to worry about Alex Rance anymore. This looks the obvious value bet of the night.