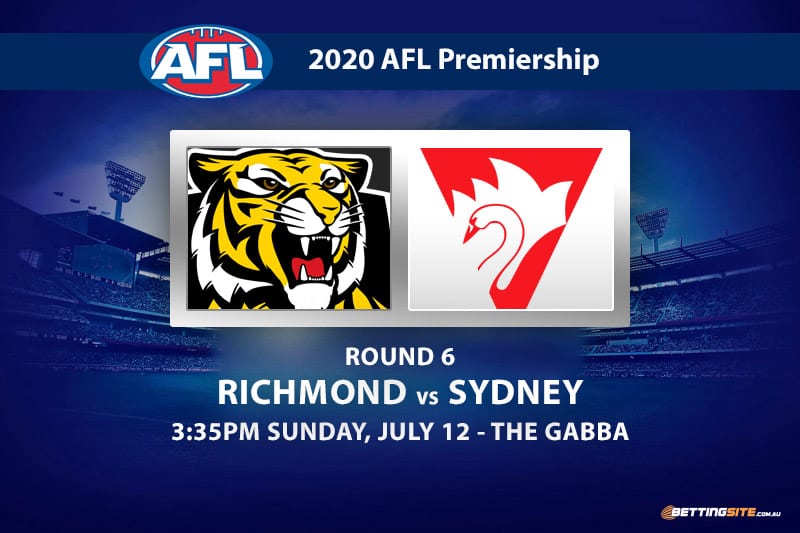 A new-look Richmond Tigers side will take on the Sydney Swans at the Gabba this Sunday afternoon with both teams desperately needing a victory.

The Swans could hardly have asked for a better opportunity to beat the reigning premiers, as a combination of injuries and absences could leave Richmond as many as seven players short this week.

Bachar Houli and Shane Edwards elected not to hub in Queensland in order to stay with their families, while Trent Cotchin, Dion Prestia, Toby Nankervis, David Astbury and possibly Tom Lynch could miss through injury.

The Gabba provides an excellent neutral ground for these teams to play on, as its broad shape is similar to the MCG and SCG while sitting between the two in overall size.

Dylan Stephens and Chad Warner were taken at picks five and 39 in the 2019 AFL Draft, and they will become fully fledged senior players for Sydney this week.

Someone needs to step up with Cotchin and Prestia missing from the Richmond midfield, and Kane Lambert looks like the man for the job. With 27 touches and kicking a game-high three goals in the win over Melbourne last week, Lambert is the form player on what remains of the Tigers’ list. This guy is one of the best runners in the league, so he will take some minding.

Nobody racks up stats across half-back quite like Jake Lloyd does. The rebounding backman has been Sydney’s deep-lying playmaker for many years now, averaging 30 disposals per game in 2019 and just under 25 per game in 2020. Lloyd had 37 in his last battle with the Tigers and should see plenty of the footy again this week, regardless of how the Swans fare on the scoreboard.

He might have to spend a bit more time in midfield on Sunday, but Dustin Martin’s form ahead of the ball has been terrific. You can bank on Richmond scoring whenever Martin is one-out inside 50, as was the case when he booted 3.2 in his last meeting with the Swans. Get on Dusty to drift forward at some stage and kick a couple.

Every week Isaac Heeney does incredible things on the footy field, but it is time for the Sydney star to simply go forward and kick some goals. The Swans won’t need as much help in the midfield this week, which should allow Heeney to stay deep and impact the scoreboard.

Most Richmond matches this season have gone over the total points mark, but the Tigers could find it harder than usual to score with so many key players missing. The Swans sans Buddy Franklin are one of the least productive teams in the league up forward, which points to a low-scoring affair at the Gabba.

The inclusion of Noah Balta to the Richmond defence worked tremendously well, as he took six intercept marks in a standout performance. If Balta maintains that kind of form and the Tigers can fill their gaps around the ground, they should pinch a slim victory this Sunday.