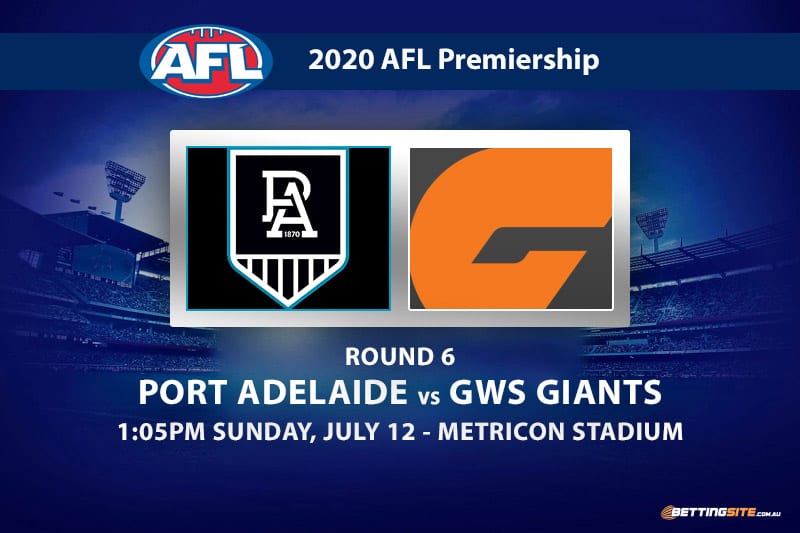 Two potential premiership contenders will do battle at Metricon Stadium this Sunday when the Port Adelaide Power take on the Greater Western Sydney Giants.

You won’t find a better contest on offer in round six of the 2020 AFL Premiership, as both teams are loaded with established stars and emerging talents.

Some of the most important matchups will take place in the Giants forward line, as the Power need to find a way to stop the likes of Jeremy Cameron, Jeremy Finlayson and the illusive Toby Greene.

The best asset Port brings to the table is its midfield and forward six, with the likes of Travis Boak and Charlie Dixon among the league’s top performers in the early rounds.

However, last week’s loss to the Brisbane Lions has brought about a selection shuffle for the Power, with Tom Rockliff axed after coach Ken Hinkley confirmed the midfielder’s form was “not quite at the level” required.

Last time these teams met was in Heath Shaw’s 300th match, where the Giants led the entire game but only just held on for a one-point win.

Inside midfielders with lots of strength can be very useful against the Giants, who prefer to win the ball cleanly and effectively wherever possible. Ollie Wines is a bull in the middle and should have a great contest against the likes of Callan Ward and Jacob Hopper. We think Wines’ best footy is ahead of him in 2020, so keep an eye on his form in the next few weeks.

Josh Kelly’s average of 21 disposals per game is down on previous season, but the skilful midfielder is trending upwards and looks poised for a big one against the Power. With 30 touches in his last game against Port and 30 last week against the Hawks, Kelly is very likely to strike again as he often backs up his strong performances.

Last week was tough for Charlie Dixon, who was well held by Harris Andrews in a one-sided contest against the Lions. But if the Power can break even in the midfield and give their star forward a chance, he can take a few grabs and kick a bag. Dixon’s body is in peak condition, while he will be returning to the same ground where he kicked six against the Eagles in round four.

Harry Himmelberg is often the forgotten man in Greater Western Sydney’s star-studded forward line, but he stole the show last Sunday with four goals in a big win over Hawthorn. Himmelberg is always energetic and will contribute plenty whether or not he hits the scoreboard, but he could be the danger man again if the Power focus all their attention on Cameron, Finlayson, et al.

Although there will be storms for a majority of the weekend, Saturday’s forecast on the Gold Coast suggests more sun than rain will come through. A dry game will be perfect for both sides, allowing their tall forwards to mark at full capacity. As these teams have been scoring healthily in 2020, we think you can push the total points line from 126.5 up to 131.5 and still take the overs.

The Giants made a statement with their win over the Hawks, but the Power play Metricon Stadium better than anyone. Port Adelaide is 8-0 on the Gold Coast and will be tough to beat this Sunday if Charlie Dixon gets fired up.