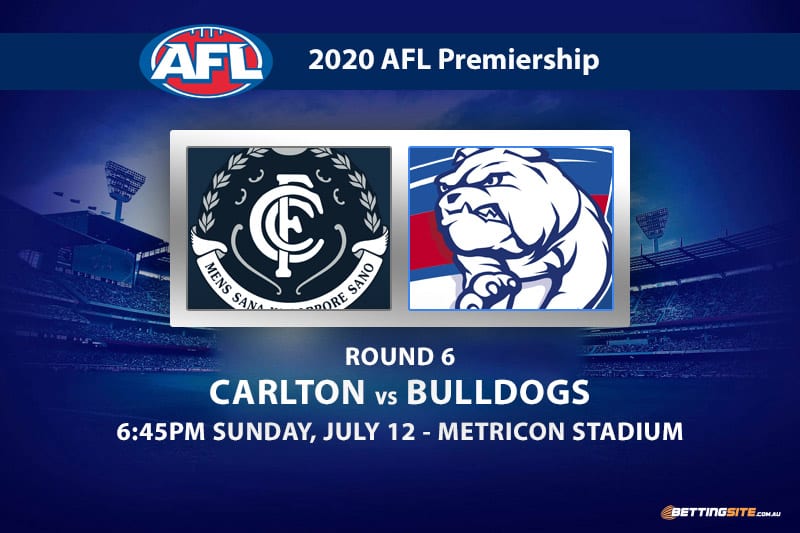 The action at Metricon Stadium continues with the final game of round six, which sees the Carlton Blues take on the Western Bulldogs.

These sides played in two significant matches last season; the first was a massive win to the Blues when they broke their losing streak in round five, while the Bulldogs squared the ledger later in the year in a three-point thriller where both sides cracked the ton.

A few important players return to their respective squads this week, with Zac Fisher back in for Carlton and vice-captain Lachie Hunter playing his first game for the Doggies since his drink-driving suspension.

Bulldogs defender Hayden Crozier has been rubbed out for this match following a dangerous tackle, while Lin Jong is out for the next six weeks with an ankle injury.

The last three weeks have been very positive for the Bulldogs, as they have beaten the Giants, Swans and Kangaroos, but the Blues have form of their own with upset wins over Geelong and Essendon.

Finding the footy in 2020 has been very tough for the 2019 Rising Star winner, but this week could be different for Sam Walsh. In the two games he played against the Bulldogs in his debut season, the young star had 26 and 22 touches, and we think he hits a similar mark in this match. Walsh’s elite running capacity allows him to get to more contests than opposing midfielders, giving him more opportunities to get disposals.

The Bulldogs midfielders have endured a strange season, first with Lachie Hunter missing from the squad and now Josh Dunkley out with syndesmosis. Macrae has held strong in the guts while his teammates have dropped off. Macrae and Hunter work very well together, and the latter’s return should give the former a little more room to manoeuvre this week.

Sharing his time between the forward 50 and the flank, Jack Martin is always a danger when he gets a sniff around goal. Although Martin is Carlton’s second-top scorer this season, Sportsbet is offering very healthy odds for the former Gold Coast star to kick multiple goals. We like his chances both in the air and on the ground this week.

The Bulldogs have kicked the first goal in each of their last three matches, and we think it is Wallis’ turn this week. Although best known for his crumbing, the smart forward holds his own in one-on-one marking contests and also has a strong set-shot technique. The Blues will defend the tall forwards well, meaning a player like Wallis could sneak under the radar and bag the opener.

Either by under 15.5 points

Close matches have been quite common during this 2020 AFL Premiership season, and this game fits the criteria for another nail-biter. Carlton needs to perform well to stay relevant in the finals conversation, while the Bulldogs’ great form could fall away at any point. The Blues were outplayed by the Saints last week and will want to make amends with a strong display allround.

While it should be close, our tip falls in favour of the Bulldogs. While they are missing a few stars, Lachie Hunter’s return adds some serious class to the midfield. If nothing else, the battle between Marcus Bontempelli and Patrick Cripps should be an absolute ripper.