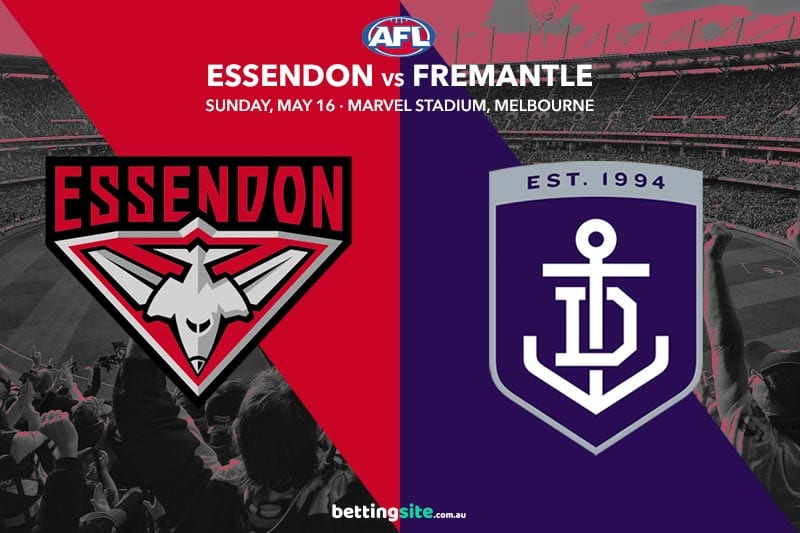 The Essendon Bombers will look for their fifth straight victory over the Fremantle Dockers when the two sides clash at Marvel Stadium this Sunday in round nine of the 2021 AFL season.

Neither side has won a match since round six, yet the Dockers are sitting outside the top eight by percentage only and could easily jump in with an upset victory this week.

The Bombers have scored over 100 points in each of their last three matches, but they will be without one of their most dynamic forwards in Jake Stringer (hamstring) this weekend.

Both Luke Ryan and Adam Cerra are close to a return for the Dockers, but the pair need to train well and pass their fitness tests in order to be considered for selection.

The Dockers have struggled to finish their chances this season, kicking 45 behinds in their last four matches. This inaccuracy has hurt them, as it allows opposing defenders to counterattack on kick-ins. Jordan Ridley takes a majority of Essendon’s kick-ins and should feature prominently this weekend.

Not many Dockers are having an impact inside 50 this season, but Michael Walters should stand up for them this week. Walters is averaging just one goal per game in 2021, but he has kicked a goal in five straight matches against the Bombers and should hit the scoreboard this weekend.

With Dylan Shiel and Jye Caldwell sidelined at Tullamarine, the Bombers have relied on Andrew McGrath, Darcy Parish and Zach Merrett in the midfield. Merrett has been accumulating as well as ever, averaging over 30 touches per week.

Andrew Brayshaw has collected more of the footy than any other Docker in 2021, but he has a horrible track record against Essendon. AFL bookmakers have Brayshaw at very short odds of $1.17 to get 25 touches this weekend, so it might pay to look elsewhere in the disposals markets for Freo.

The Bombers are the second-most potent team in the AFL when it comes to the scoring end, sitting behind only the Bulldogs in total points this season. The Dons have been unlucky not to secure more wins, as they have lost a few matches by less than a goal. Fremantle has lost its last four matches against Essendon, and we don’t think the Dockers will snap that streak this week.

Jordan Ridley to get 25+ disposals

Not only does Jordan Ridley boost his disposal count through the kick-ins, he also intercepts the footy better than most defenders in the league. The 2020 Crichton Medal winner is having an even better season this year, having already passed the 25-disposal mark in three matches, including two massive 30-touch performances.

Same game multi: 3 legs @ $15.75
Michael Walters will keep his goalkicking streak against the Bombers alive this week, helping the Dockers stay within reaching distance. We expect a strong performance from Jordan Ridley will keep the Dons in front as they secure their third win of the season.